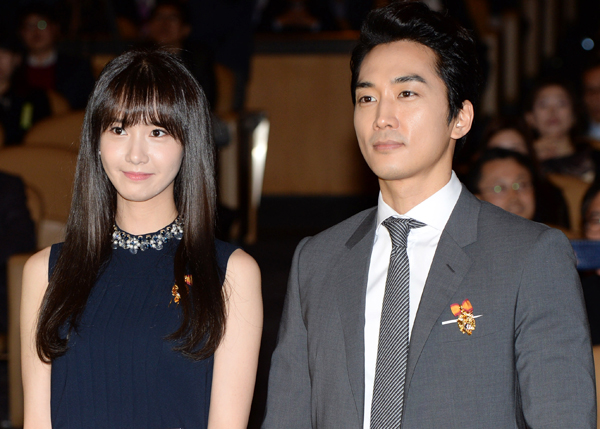 
Actor Song Seung-heon, right, and Yoona, a member of the K-pop group Girls’ Generation, received plaques from President Park Geun-hye Tuesday as they were chosen as representative celebrity taxpayers for last year.

The National Tax Service selects a set of star taxpayers every year.

An official ceremony was held at COEX Convention Center in southern Seoul to honor 644 people chosen by the organization as the best taxpayers in 2014.

This is not the first time for Song to be given the annual award, though. He earned a plaque from the state-run tax service in 2010.

Song recently landed a lead role in the upcoming film “Wonderful Nightmare,” in which he pairs up with singer-actress Uhm Jung-hwa.

Yoona, on the other hand, is considered a celebrity who regularly undertakes charity work.

The singer even became a member of the Honor Society earlier this year. The club, created by charity organization Community Chest of Korea, is for individuals who have donated more than 100 million won ($90,000).

According to the organization, Yoona has been giving money to help underprivileged people since 2010.