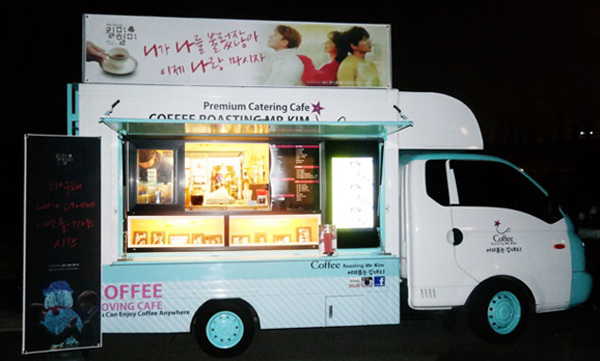 A coffee truck owned by Kim Sung-yong, a young businessman. Fans of celebrities book Kim’s cart to serve coffee to staff at the filming locations of dramas or movies their favorite stars are working on. Provided by Kim Sung-yong

Kim Sung-yong makes a living by dripping and selling coffee, but what differentiates his business from others of a similar nature is that he delivers his concoctions to VIP clients - including actors Lee Min-ho, Zo In-sung and Hyun Bin

Although the country’s cafe scene became saturated years ago, the young businessman, wh

o turned 34 this year, earns an average of about 10 million won ($9,093) per month by selling coffee, mainly paid for by devoted fans who want to show their love of their favorite stars.

Jogong, as the practice of fans purchasing treats for their favorite celebrities is called in Korean, originally referred to gifts sent by colonies to their ruling states. The list of offerings during the Joseon Dynasty (1392-1910) varied from rolls of silks to delicacies collected from all parts of the nation.

The pricey presents were then sent on by the main government to China, which had a lot of power during that time.

But jogong is now commonly used in the entertainment scene as a term referring to high-priced gifts given to favorite stars, from the latest Apple MacBook Air to a brand-new leather bag from Hermes.

Over time the culture has evolved, too.

Fans band together to collect money and send meals or coffee trucks, like the one operated by Kim, to feed stars and the staff members who are involved in the production of films or drama series in which their favorite celebrities are taking part in.

This has become very common among fans regardless of their nationality.

“I went to the location of the drama series ‘Spy’ yesterday,” said Kim during a phone interview with the Korea JoongAng Daily.

“That was my fourth visit to the location of ‘Spy’ and I have to visit three times more because Kim Jae-joong has a large fan base overseas. Fans from six Latin American countries organized yesterday’s event.”

The singer-actor in question is a member of the popular K-pop trio JYJ.

The young businessman added that he was requested to take his cart, called Mr. Kim who Roasts Coffee, to the set by seven different Kim Jae-joong fan clubs.

But Kim refrained from using the term jogong to describe the fans’ actions because he said the word has a negative connotation. Instead, he replaced it with “support” or “event.”

Kim’s business’s earnings are high compared with other coffee trucks, but the money does not come easily. He has more tasks to undertake than just dripping coffee.

“Most of these overseas fans can’t come to the location on the day of the event. Then I become busier than usual because I have to take pictures of their favorite stars sipping drinks from our coffee truck or get autographs from the stars in order to assure fans I’ve conducted this event successfully.”

Once Kim receives an order, he decorates his whole truck in homage to the celebrity whose set he will visit.

Framed photos of the star are installed, along with banners emblazoned with lines written by fans, for example, “Today’s coffee is on Kim Jae-joong.”

Stickers bearing the faces of the celebrity are also plastered on the coffee cups sleeves.

These touches are often put into place by fans who volunteer their services on the day of the event.

The cost to send the truck varies depending on how many cups of coffee and drinks are ordered, but it runs from 300,000 won.

Kim’s path to success has been bumpy. He majored in fashion marketing in college and landed a job at a well-known fashion company, but the reality was harsh. He was poorly paid but had to work seven days a week.

He eventually purchased a small truck and renovated it with the aim of starting a coffee business, but it wasn’t easy to make money. He frequently had to pay fines for doing business on the street, which is illegal in Korea.

One day, however, he received an offer from a group of fans of the singer Gain to deliver coffee to a location the singer was filming at, and that was how everything got started.

In recent years, the jogong business has been thriving in terms of size and scale, but this has a downside for Kim.

“I think I was the first one who started this business four years ago,” he said, “but now I see a lot of similar businesses. It’s too late if you want to join this business now because the competition is too fierce.”