With first win since 2008, Irish eyes are smiling

With first win since 2008, Irish eyes are smiling 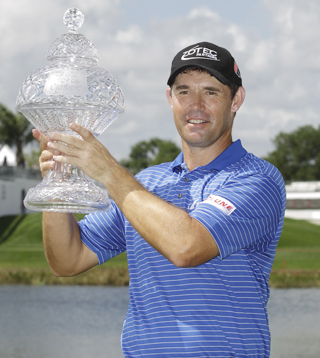 Padraig Harrington savors a rare victory on Monday at the Honda Classic in Florida. [AP/NEWSIS]

PALM BEACH GARDENS, Fla. - Whether piling up majors or playing so poorly he lost his PGA Tour card, Padraig Harrington never wavered from one goal: stay close until the last nine holes.

His caddie, Ronan Flood, reminded him of that Monday morning in the Honda Classic when Harrington was four shots behind at the turn.

“He said, ‘Look, would you have taken this on Thursday?’ And I said, ‘Yes, that’s what you want,’’’ Harrington said. “You want to be in contention with nine holes to go, because anything can happen coming down the stretch. And it did.’’

Not even Harrington could have written the script to his playoff victory at the rain-soaked PGA National.

He ran off four straight birdies on the back nine to take the lead. He gave it back with a 5-iron into the water for double bogey on the par-3 17th. He made a 15-foot birdie putt to force a playoff. And given a shot at redemption, he hit a 5-iron to 3 feet on the 17th to win on the second playoff hole, when 21-year-old rookie Daniel Berger hit into the water and made double bogey.

Ten years after winning the Honda Classic for his first PGA Tour victory, Harrington won it again. It was his first win since the 2008 PGA Championship at Oakland Hills for back-to-back majors.

Harrington lost his card last year and needed a sponsor’s exemption to get to the Honda Classic. Now he’s eligible for the Masters, The Players Championship and at least two World Golf Championships. He had fallen to No. 297 in the world. The 20th win of his career moved him to No. 82.

None of that mattered as he sat next to the trophy, Irish eyes smiling bright as ever.

“It’s not about what it means to my career or what it means going forward,’’ he said. “You don’t win that often. When you win, make sure you enjoy it.

“It’s one of those golf courses where you get yourself in contention, it is a little bit uncomfortable. But that’s the way it is.’’