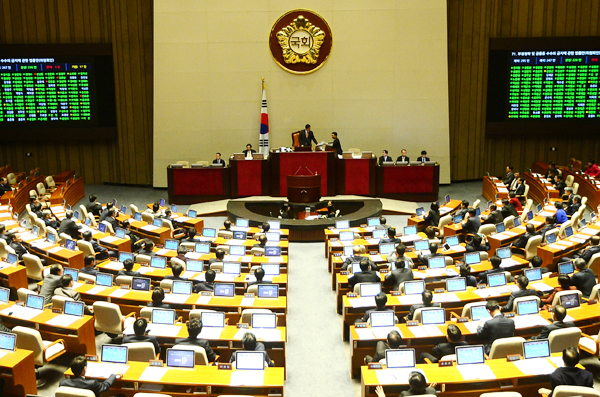 Electronic boards in the main conference hall of the National Assembly show names of lawmakers who cast their vote for a tougher anti-graft bill on Tuesday. [NEWSIS]

The National Assembly on Tuesday passed a tougher anti-graft bill after years of debate, but criticism flared over the inclusion of journalists and teachers and the lawmakers’ hasty deliberations.

The new anti-corruption law was approved by 226 lawmakers, voted against by four and there were 17 abstentions. It will take effect in October 2016 if it survives expected constitutional challenges.

According to the new law, a public official will face criminal punishment for receiving money or favors worth more than 1 million won ($912) even if they are unrelated to his or her job. Beyond bribes, entertainment like expensive meals, golf games and paid vacations is also covered by the law.

The law also covers a wide range of professions. Aside from civil servants and legislators, teachers at private schools including kindergartens as well as employees of media companies are covered because the bill considers the nature of their work “public.” Their spouses will also be covered by the law.

If a public official receives money, goods or entertainment worth less than 1 million won in connection with influence-peddling, he or she will be liable to a fine of up to five times the value of the money or gifts received.

The bill, named after Kim Young-ran, the former head of Korea’s Anti-Corruption and Civil Rights Commission who submitted the initial draft to the legislature in June 2011, had seen slow progress. But it gained headwind with public support following the sinking of the Sewol ferry in April last year. Pressure mounted for the government to clean up the public sector after the tragic deaths of more than 300 passengers shed new light on the corrupt relationship between Korean officials and companies in the private sector, like ferry and shipping companies.

The ruling and opposition parties struck a deal on Monday evening to hold a vote Tuesday after making a final adjustment to limit the scope of the family members who will also be covered by the law. It will be applied to spouses of civil servants, legislators, teachers and media company employees, a change from the initial plan to include all immediate family members.

During the final hours before the scheduled vote Tuesday, some lawmakers, including the head of the ruling party, expressed concerns about the contentious law.

“We all are concerned because it could be unconstitutional, but the lawmakers are pushed by public sentiments to pass it,” said Kim. “The main premise of this law is the good intention to build a transparent society, so I believe we cannot delay it any longer, although it may have gone too far.”

Another Saenuri lawmaker, Lee Jin-bok, said Tuesday that it was regrettable that civic groups won’t be covered by the new law. “Aren’t they actually the largest interest groups?” he said.

The legal community also expressed concerns that the law was so broad and ambiguous that anyone can become the subject of a criminal investigation.

“Because it will allow law enforcement authorities to launch a probe whether the gift is related to a job or not, there is a high likelihood of the police and the prosecution to abuse their investigative rights,” said Lim Ji-bong, a professor of law at Sogang University. “The prosecution is often questioned over its motive for going after politicians now, and we will see more of such controversies.”

The prosecution also expressed concerns. “If the law takes effect, Korea will effectively become a police state,” said a prosecution official. “You can be a target of surveillance while eating a meal with someone at a restaurant.”

Choi Jin-nyoung, a lawyer and a former spokesman of the Korea Bar Association, said the big winner with this law will be the prosecution. “As long as they can prove that a public official has taken money, whether it is in return for a favor or related to the job, they can send the official to prison,” he said.

Constitutional scholars said the law’s wide scope is unconstitutional, because it violates the void-for-vagueness doctrine and restricts people’s basic rights.

“The intention of the law is to enhance the transparency of the bureaucracy, but it was expanded too widely and excessively limits the people’s basic rights,” said Professor Lim.

Lim said excluding executives of banks in which trillions of won in public funds were injected cannot be explained. He said the law had failed to present legal grounds on why journalists and teachers at private schools were singled out.