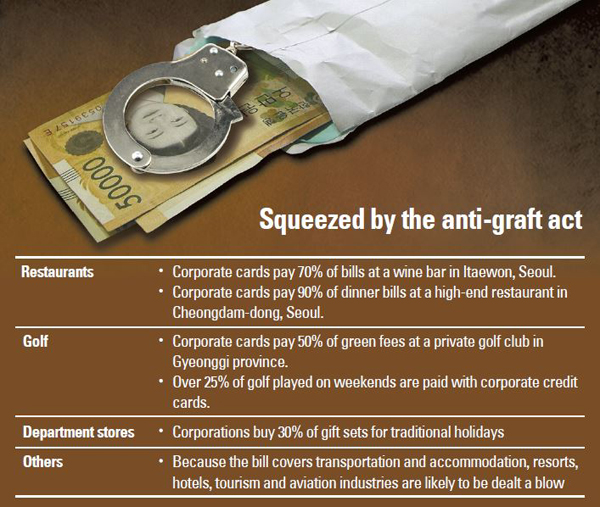 The passage of a tough anti-graft bill at the National Assembly on Tuesday instantly triggered complaints from business saying the controversial legislation will affect corporate activities and further depress the already flagging Korean economy.

The so-called Kim Young-ran bill aims to sever the dark connections between the private and public sectors by subjecting a wide range of occupations - from civil servants and legislators to teachers at private schools and journalists - to criminal punishment for receiving money or favors worth more than 1 million won ($912). For a meal, the ceiling has been designated at 30,000 won.

“A huge change in corporate activities is anticipated, given the bill has made it possible [for those parties involved] to be punished regardless of whether the transaction between them involves a reward or not,” said an executive who participated in a conference held on Feb. 27 at the Federation of Korean Industries, a business lobby. “A major headache has been added when companies are already struggling with an ever-challenging management environment.”

During the conference, nearly 40 executives from major conglomerates who are responsible for ethical management attended a lecture by a lawyer with an expertise in the field and discussed how to cope with the corporate environment after the law goes into effect.

Large companies have no choice but to embark on major reforms when it comes to government relations (GR) duties.

Workers engaged in GR have traditionally paid bills when they met with government officials, aides to lawmakers and journalists.

“The meetings [between GR employees and their counterparts] were not necessarily for the sake of making a request,” said a GR executive at a conglomerate, “but rather for exchanging information. We will have no choice but to tap on the calculator whenever we are supposed to meet people.”

He added in an anxious voice that the views of government officials and politicians may not be properly heard by the corporate side in the future given that contacts will be reduced.

Cho Dong-geun, an economics professor at Myongji University, says tailoring management activities with the new legal yardstick will result in a side effect of some businesses shrinking.

Retailers could be affected earliest, even though the law won’t go into force until October 2016. Corporations are highly likely to trim their spending on gifts for occasions such as Chuseok, or Korean Thanksgiving, and New Year holidays - and suppliers and partners of retailers will inevitably be affected.

“Given that 30 to 40 percent of revenues from gifts originate from corporations, we will undergo a huge revenue loss,” said a spokesman from a department store. “We are brainstorming ideas such as further diversifying the size of gift certificates [that usually range between 5,000 won and 1 million won] and releasing gift sets costing less than 30,000 won.”

Some restaurant operators are complaining about the 30,000 won entertainment limit for each customer.

“I can’t possibly make ends meet by serving menus that cost less than 30,000 won per person,” said an owner of a Korean fine dining restaurant. “I can only take that law as a message from lawmakers that they want us to go bust.”

A spokesman with a five-star hotel in Seoul said the hotel does not serve meals that cost less than 50,000 won. “The kind of quality and service that customers expect from top-class hotels will no longer be possible,” he said.

Another victim will be the golf industry. A CEO of a private golf club in the Seoul Metropolitan area said over 50 percent of green fees are paid with corporate cards on weekends and the majority of those payments will be subject to the new bill.

He added that the Kim Young-ran bill has cast a chill over the government’s attempt to popularize golf. Golf is perceived as an expensive and luxurious sport in Korea compared to other countries and President Park Geun-hye asked officials from the Ministry of Culture, Sports and Tourism to come up with measures to revitalize the golf industry during a cabinet meeting on Feb. 3 to help the economy in general.

A contraction in consumption won’t be limited to high-end services and goods, many predict.

Because the bill won’t allow free trips or accommodation, a ripple effect could reach as far as the tourism, resort and airline industries.