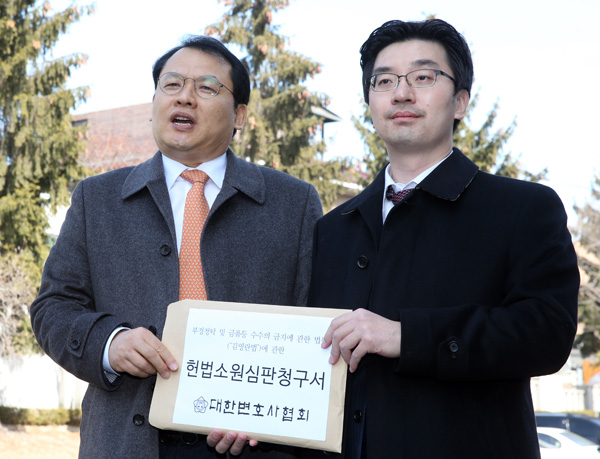 The controversial anti-corruption bill’s constitutional legitimacy has been challenged, just two days after it was passed at a National Assembly plenary session on Tuesday.

The Korean Bar Association and the Journalists Association of Korea filed a constitutional appeal on Thursday afternoon claiming that the so-called Kim Young-ran bill, aimed at preventing corruption in the public sector, was unconstitutional on various grounds.

The bill, named after Kim Young-ran, who formerly headed Korea’s Anti-Corruption and Civil Rights Commission and submitted the initial draft to the legislature in June 2011, had seen almost no progress until lawmakers rushed to approve it this week.

“We understand the intention of the bill, but we are filing a complaint because some parts of the bill violate the Constitution and cannot be justified,” Kang Shin-eop, the press director of the bar association, said on Thursday.

The petition insists that the bill goes against constitutional law because it regulates only media companies in the private sector whose work is considered public. It goes on to add that “illegal requests” made to public officials are not clearly outlined, and that the idea that public officials will be punished if they don’t report that their spouses have accepted bribes goes against freedom of conscience.

“The bill is intended to create an environment in which public officials may carry out their duties fairly, but coverage is expanded so much that journalists become subject to the bill,” the petition read. “It might overly restrict the private sector and harm freedom of speech, which is guaranteed by the Constitution.”

Before reviewing the bill’s constitutional legitimacy, a small bench of judges at the Constitutional Court must decide within 30 days whether the complaint is legally justifiable.

One issue is whether the bill violates the basic human rights of those covered by the bill. This is the first case in Korea in which a bill is set to go to the Constitutional Court before it has been made official by President Park Geun-hye, who has up to 15 days to officially announce a bill passed by the National Assembly. “Given that the bill is going to be announced and take effect as time goes by, it’s possible to see the bill is already violating basic human rights,” said Ha Chang-woo, the president of the bar association.

Lawmakers admitted on Wednesday, just a day after the bill was passed, that it needed to be revised, admitting to hastiness and poor preparation.