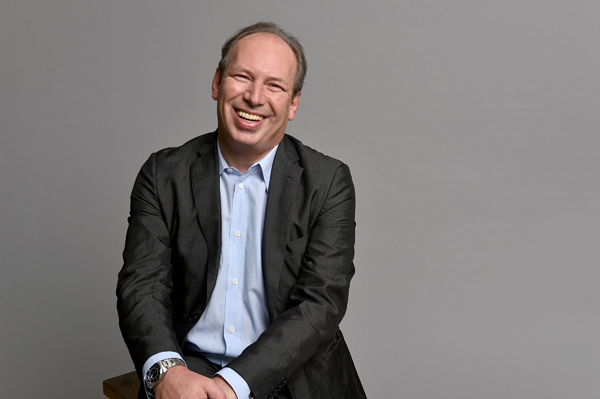 Hans Zimmer, who had a childhood fascination with Muhammad Ali, has supplied the music for the upcoming television series “Premier Boxing Champions.” [AP/NEWSIS]

NEW YORK - Oscar-winning composer Hans Zimmer is known for powerful scores for such films as “Inception,” ‘’Gladiator” and “The Dark Night.” Now he’s hoping to knock people out with music for the small screen.

Zimmer, who had a childhood fascination with Muhammad Ali, has supplied the music for the upcoming television series “Premier Boxing Champions.”

The show’s executive producer Michael Marto plans to broadcast 30-40 fights per year on a variety of networks, including NBC, CBS and Spike. The first fight premieres Saturday live on NBC.

Marto believes a memorable soundtrack “elevates the brand,” and was glad Zimmer was willing to come on board for the project.

“He could have given us one optimistic, crowd-pleasing ‘Rocky’ theme and be done, but he went much further. He did as much music for this as for ‘Gladiator’ or ‘The Last Samurai,’” Marto said.

While Zimmer admits he intended to record far less music, the sights and sounds around the gym inspired to him to produce over 70 minutes of musical content that reflect a variety of moods and emotions.

Recently, Zimmer spoke with The Associated Press to discuss the project, his unique approach and playing guitar during Pharrell Williams’s performance of “Happy” at the Grammy Awards.

Q. Tell us about that guy in a bow tie and tails playing guitar at the Grammys.

A. Pharrell is the most gracious human being I know. Basically, he let this 57-year old man become a 17-year old guitar-playing lunatic again. I had the time of my life. Things like this are once in a lifetime: to stand on stage at the Grammys playing guitar, you know, just basically rocking out.

Do you and Pharrell have much in common?

Why does boxing appeal to you?

Growing up in Germany during the ’60s and ’70s, the most famous name in the world was [Muhammad] Ali. He was known internationally. He was more famous than The Rolling Stones. I remember seeing the fights on television and thinking, “That was really exciting.”

So why score a TV boxing show?

Seeing young fighters coming up and changing their lives completely - there was a lot of discipline, not much different than growing up to be a musician. I’m a musician and would never climb in the ring.

I would never have the courage to do that. So part of it is the sheer unimaginable thing that these guys do. There is a visceral quality to this sport, and an extraordinary amount of thinking and artistry and dedication. I did a gladiator movie, so I had some funny qualifications that allowed me to get into the ring.

This score is more than a soundtrack to a boxing show. How did you approach it?

You took a unique approach to the sounds for this score?

All the percussion is actually the guys punching either a bag or punching each other, so instead of drums, it’s actually the sound of the glove connecting... When I walked into the gym, and heard the sound - I’d be hard pressed to find a percussionist who whacks his drums with as much power as these guys have. So why settle for second best?... I use the sounds of the punches to create a rhythm out of it. Then I went to London and recorded it with an orchestra. I approached it like I was doing a large film score.

Any young musicians you wish you could work with?

Every time I see Bruno Mars doing anything, I think I wish I was Bruno Mars. I just think that he’s so extraordinarily talented.