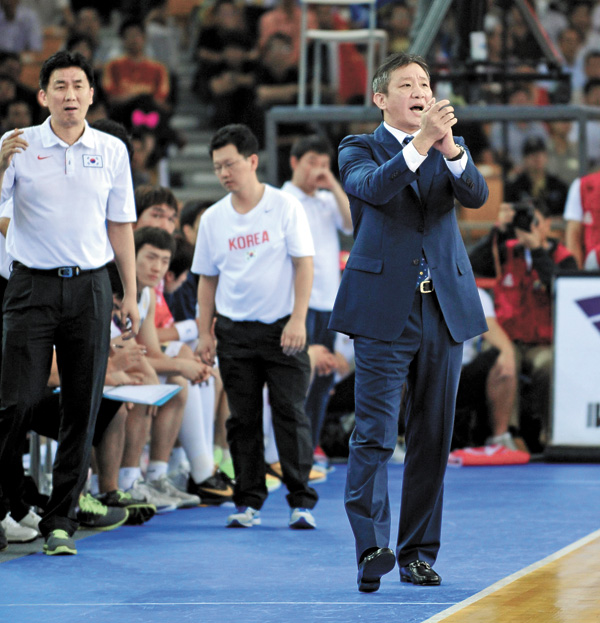 Many athletes have nicknames that fail to reflect how good they really are. Hur Jae is not one of them.

The Korean legend has been known as “President of Basketball,” “Basketball Level 9” and “Basketball Genius.”

Hur was a superstar in the series and the impetus for the basketball boom starting in the late 1980s with his skill and passion. Although fans still debate whether Hur or Lee Chung-hee is the best scorer ever, everyone agrees that both left their indelible marks on the Korean game.

Hur’s was primarily a point guard or shooting guard on the court, yet he was versatile enough to sometimes play the role of a small forward and even power forward.

The Chuncheon native was left handed, but ambidextrous on the court. Standing 188 centimeters (nearly 6 foot 2), Hur was big for a Korean guard at the time. He was a technician who showed a high level of skill in almost all of the fundamentals of basketball - dribbling, passing, shooting and steals - and has the statistics to prove it.

“Hur was technically superb, but he also had a powerful game like players in the NBA and Europe and that’s why he stood out,” Lee said in interviews with local media. “He was an all-round player who could perform well at any position.”

Hur, who started playing basketball at the age of 9, was tabbed as a top prospect when he was at Yongsan High School in Seoul. Though the country’s top two basketball schools - Yonsei University and Korea University - recruited him, he instead chose Chung-Ang University in Seoul. In his rookie year, he played 16 games in the Jumbo Series, averaging 24 points, 8 rebounds and 6 assists per game.

During his senior year at the Korea University Basketball Federation Cup qualifiers against Dankook University in 1987, Hur scored 75 points, 54 of them in the first half. That memorable performance remains his personal best.

Hur’s career took off when he joined the Kia Motors basketball team in 1988. With Chung-Ang University alumni Kim Yoo-taek, Han Ki-bum, Kang Dong-hee and later Kim Young-man, Hur was the core player of the Kia Dynasty, which dominated the Jumbo Series with seven titles in the eight years prior to the establishment of the KBL.

Hur, who won two MVP awards in the Jumbo Series, said his best memory was scoring 17 consecutive points in the last five minutes of Game 4 of the Jumbo Series finals against Hyundai Electronics in 1995, when Kia won the championship.

During his 11 seasons in the Jumbo Series, Hur appeared in 215 games, averaging 24.9 points, 6.6 rebounds and 3.5 assists per game. He is the all-time Jumbo Series leader in assists, second in scoring and third in rebounds.

Hur was 32 years old when the KBL was inaugurated and he officially became a professional. His team, Busan Kia Enterprise (now Ulsan Hyundai Mobis), won the first KBL championship, but Hur’s playing time wasn’t like it had been with foreigners on the court and young teammates Kang Dong-hee and Kim Young-man on the rise.

In the second season of the KBL, Hur turned in one of the best individual performances of his career against Daejeon Hyundai Dynat (now Jeonju KCC Egis) in the 1997-98 KBL Championship Series. Wearing a cast on his right hand because of a wrist injury, he hurt his ankle and suffered a laceration above his right eye during the best-of-seven series.

But Hur showed his fighting spirit until the end, averaging 23 points, 6.4 assists, 4 rebounds and 3.5 steals per game. Although Kia lost, it is a measure of his performance that Hur was selected as series MVP.

In the history of the KBL, it was the only time a championship series MVP was from the losing team.

Nonetheless, Hur was traded to Wonju Naray Bluebirds (now the Wonju Dongbu Promy) before the next season and won his second KBL title in 2003. He ended his career following season at age of 39, and his No. 9 jersey was retired by the team.

For 15 years, Hur was a member of the national team. He participated in the Olympics three times, as well as two FIBA World Championships and three Asian Games, although his teams never claimed a trophy.

Hur also was MVP of the 1995 ABC Asia Championship, even though Korea did not win the gold.

As a coach, Hur led the Egis for 10 seasons and won two KBL titles (2009 and 2011) before announcing his retirement last month. His two sons, Hur Woong and Hur Hoon, both play basketball.

“I always had a strong desire to win,” said Hur. “Whether you lose or not, you need to have the confidence to believe you can win. That’s why I played with more passion than other players.”