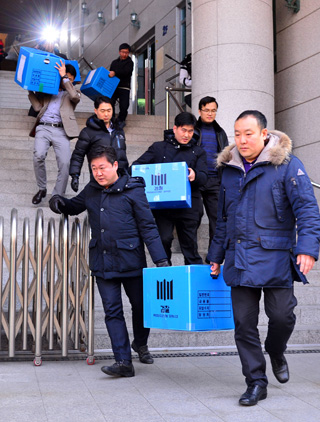 Investigators tasked with uncovering corruption in the defense industry on Wednesday raided the affiliates of Ilgwang Group, including one of its arms dealers, and apprehended its chairman on allegations that he inflated the price of equipment from a Turkish arms manufacturer.

It was later pointed out, however, that the equipment does not meet the requirements for operations, and Ilgwang Gongyoung has been suspected to have been involved in irregularities when signing with the Turkish company. The prosecution believes Ilgwang Gongyoung exaggerated the unit price of the equipment to receive a rebate from Havelsan. Prosecutors added that they will also investigate whether the document Chairman Lee Kyu-tae submitted to DAPA was forged.

“Havelsan first suggested $140 million, but we cut down $46 million,” Byun Mu-geun, the minister of DAPA at the time, said when the issue was addressed. “We don’t know how Ilgwang Gongyoung did it because DAPA had the deal directly with Havelsan.”

The prosecution said it has also questioned an official from Havelsan’s subcontractor SK C&C, a former brigadier general surnamed Kwon who is believed to have colluded with Lee, and the chief of Havelsan’s Korean branch for possible involvement in the case.

The branch chief, 43, was convicted of fraud charges at the end of last year after accepting 480 million won from Lee in exchange for lobbying officials of the company in Turkey to continue the agency contract between Havelsan and Ilgwang Gongyoung.

Lee has a similar record, and was previously indicted for embezzling 4.6 billion won out of an 8.4 billion won commission when he acted as a broker in 2010 for a Russian arms manufacturer in a 340 billion won deal. He was convicted in July 2012 and sentenced to three years in prison and four years on probation.

Lee is renowned in the defense industry. His arms dealing affiliate Ilgwang Gongyoung rapidly grew after it signed an agency contract with Havelsan in December 2002 and concluded another contract to introduce the CN235 aircraft into the Korean Air Force.