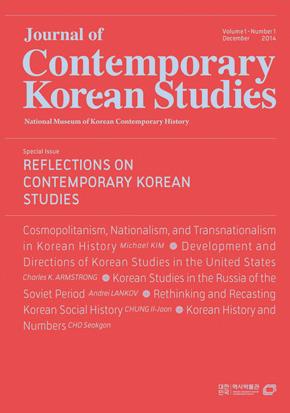 Koreans today have struggled to find a middle ground on interpreting the country’s contemporary history.

This was most evident when the National Museum of Korean Contemporary History opened in 2013 to much heated debate. Contemporary history generally refers to the period since Korea opened its ports to the outside world in 1876.

Liberals in particular were the most unhappy group. They said the exhibits praise conservative leaders such as Park Chung Hee while allocating very little space for the pro-democracy movements.

Nonetheless, the museum is hoping that more foreigners interested in Korea will learn about and discuss Korea’s contemporary history through its newly published English-language academic journal, “Journal of Contemporary Korean Studies.”

Jun Sang-in, the editor of the journal and professor of Seoul National University’s Graduate School of Environmental Studies, said he hopes that “the complicated and tumultuous experience of Korea during the past century is dealt with from the aspect of the history of civilization, and becomes the subject of active discussion in world history.”

The director of the national museum and the publisher of the journal, Kim Wang-sik, also noted that “there wasn’t any English-language academic journals that comprehensively dealt with the main issues in the fields of politics, economy, society and culture [of Korea].”

He added that research on Korea’s contemporary history will help Korean studies abroad develop further. “Journal of Contemporary Korean Studies” will be published twice a year and distributed to various educational and research institutions overseas related to Korean studies. About 2,000 copies of the first issue, museum official say, have been distributed already.

The journal will also shed light on culture and art. The inaugural issue includes reviews of period film “Roaring Currents” (2014), drama “My Love from the Star” (2014) and the “Beyond and Between” exhibition at the Leeum, Samsung Museum.