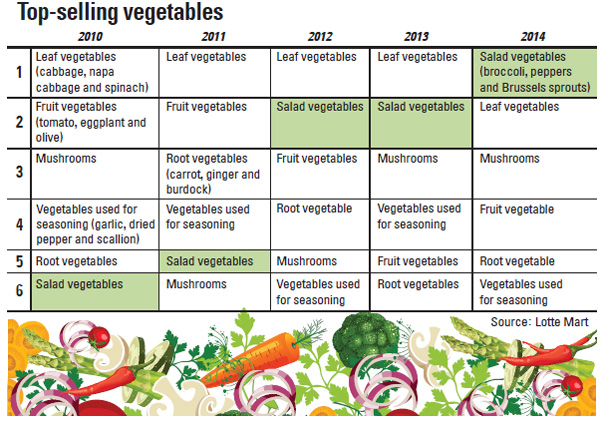 Korean diets have changed so much that vegetables used in salads now outsell the basic ingredients used in kimchi.

Lotte Mart, a major discount supermarket chain, said that sales of salad vegetables such as lettuce, peppers, broccoli and even Brussels sprouts surpassed those of leaf vegetables last year.

The change indicates younger consumers’ preference for simple meals and the changing demographics that saw the growth of single-person households.

Produce used in salads was at the bottom among six vegetable categories in 2010. It continued to climb until it took the top spot last year.

Sales of leaf vegetables, in contrast, declined by 10 percent last year compared to the previous year.

Lotte said that the changing eating habit of younger consumers contributed to the popularity of salads.

“Long gone are the days when people eat rice and kimchi with every meal,” said a representative of Lotte Mart.

“Now, many students and office workers have salad, especially for breakfast or lunch, because it is healthy and takes less time to prepare.”

Among the most popular salad ingredients are lettuce, broccoli and peppers, often called paprika in Korea. They are low in calories but make people feel full compared to other vegetables.

In response to the growing demand for salads, big supermarkets are stocking more salad vegetables and packaging them in new ways. Bigger branches are even designating separate sections for salad vegetables.

At E-Mart, the largest grocery chain, sales of salad vegetables increased by 10.1 percent in 2013 and 5.9 percent last year over a year earlier.

Brussels sprouts are particularly gaining attention because they are known for healthy phyto-chemical compounds.

Sales of the vegetable, which looks like a miniature cabbage, increased 35 times in February compared to November when it first debuted in Lotte Marts.

“As people’s eating habits have changed,” said Baek Seung-hoon, a merchandiser for the vegetable division at Lotte Mart, “their preferred vegetables also change.