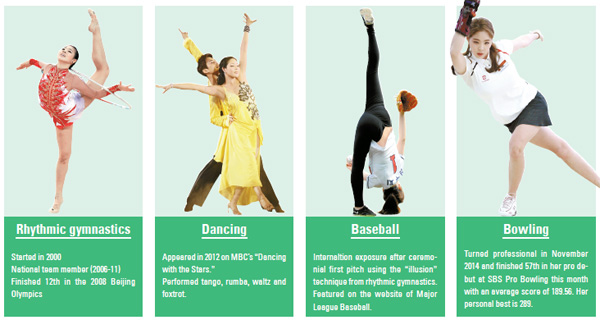 Former Olympic rhythmic gymnast Shin Soo-ji is one of Korea’s hottest celebrities. Although the 24-year-old usually can be seen in a bowling alley, as she has become a pro bowler, she also is seen at baseball stadiums and golf courses, and on television shows.

Shin is the personification of the neologism “sportainer.”

As a professional bowler, Shin got off to a slow start. In the Lord Field-Amazon Aquarium SBS Pro Bowling competition March 6, she averaged 189.56 per game over 16 games to finish 57th among 79 competitors. Prior to the event, Shin said her goal was to avoid last place.

Shin, a bronze medalist in the 2009 Asian Rhythmic Gymnastics Championships, passed her professional bowling test in November, quite an achievement after 10 months of bowling lessons. 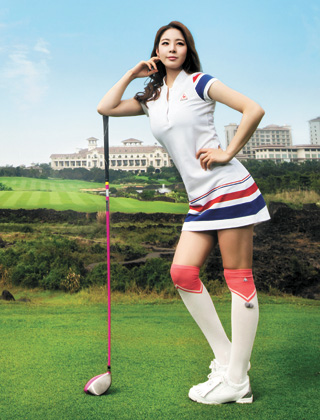 “Within a year, Shin received a score that a bowler with 10 years of experience couldn’t easily make,” said Yoo Cheong-hee, director of the Korea Professional Bowling Association.

“I even practiced after getting shots in my joints to relieve the pain in my fingers,” she said. “After the competition, my body was able to recover. And I feel more confident that I can do better next time.”

But bowling is not the only sport that interests Shin.

After retiring as a rhythmic gymnast in 2012, Shin got interested in golf after taking a class at Sejong University Graduate School in Seoul. Since July, she has been practicing under the guidance of professional coaches.

“One day, I went to this screen golf game shop with my friends, but they didn’t let me play because I wasn’t good enough,” she said. “That incident fired my competitive spirit to start golf.”

Before starting to train for bowling, Shin said she practiced golf nine hours a day. There was one time when her coach stopped her because she was practicing shots with an injured hand.

“For now, my goal is to improve from the novice level, but someday I really want to play golf nicely,” she said. “After I succeed as professional bowler, I want to try being a professional golf teacher.”

Shin said her favorite golf club is the driver, claiming she can hit the ball 210 yards off the tee.

“My jaws dropped when I saw her drive shots landing on the targeted area accurately,” she said. “I really want to do drive shots well like Ji-yai.”

After her retirement, Shin was frequently seen on television. In the summer of 2012, she received some attention after participating on “Dancing with the Stars,” showing her rhythm and agility.

In July 2013, Shin got worldwide media coverage for throwing out the ceremonial first pitch at Korea Baseball Organization League games. Using an “illusion” technique, a 360-degree spin of the torso as one leg remains on the ground, from rhythmic gymnastics, she was even featured on the Major League Baseball website.

“As many people are keeping their eyes on my ceremonial pitch, I feel a little bit of pressure over what I should do next,” Shin said during a recent appearance on an entertainment show. “If I get a chance, I want to throw fastest ball in the history of female ceremonial pitchers.”

Shin said she suffered from depression after her retirement from rhythmic gymnastics, but she regained her energy by playing other sports. She even joined an amateur baseball club, and tried her hand at experiencing equestrian events, badminton, tennis, football and basketball.

“I really have a strong desire to win, so I always try as hard as I can in every sport,” she said. “I’m doing these sports not because someone ordered me to do so, but because I want to do it.”