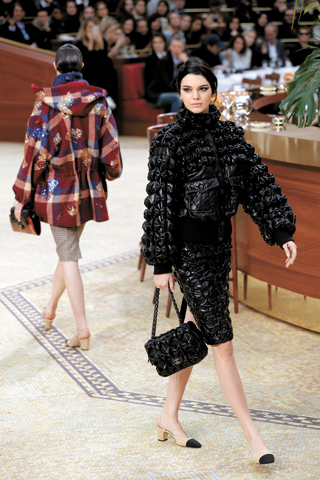 Can it be true? Chanel dropped its prices?

That was the question being asked by customers madly calling Chanel outlets through Seoul Wednesday after rumors were whipped around by lovers of the luxury brand.

The rumors were true. Since Tuesday, Chanel has lowered prices from 11 percent to 23 percent on its handbags, including the Classic series, Boy Chanel and the 2.55. 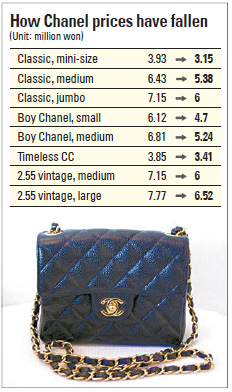 It is rare for luxury bands such as Chanel to adjust their price downward.

In the past 10 years, the company has usually raised prices.

It is known not to treat customers to sales.

One exception was a 5 percent reduction in 2011 after the Korea-Europe free trade agreement cut tariffs.

The company is cutting prices in Asia starting next month including Korea, China and Hong Kong.

The reason is the weakening euro.

Starting March 9, the European Central Bank started purchasing 60 billion euros ($64 billion) worth of public and private bonds every month to prop up the eurozone economy.

The quantitative easing has weakened the euro against not only the U.S. greenback but also the Korean won and even the Japanese yen.

“The global headquarter is adjusting the prices worldwide so that the customers can purchase our goods without big price difference among any of our stores,” said a Chanel Korea official.

But Europeans are expected to pay more.

The Wall Street Journal recently reported that Chanel will be raising prices around 20 percent in Europe. In Asia, the same product will see prices drop an average of 21 percent.

Quartz, a digital business new outlet, reported that Chanel will adapt prices of products beyond bags, including jewelry and shoes, by the end of this year.

Luxury brands overlooked price differences by market in the past.

The same handbag had very different prices depending on the region. In New York, customers paid 10 percent more than in Paris. In China, high tariffs pushed the prices 30 to 40 percent higher than in Paris, according to Luka Solca, an analyst at Exane BNP Paribas.

Chinese consumers were paying 63 percent more for the same bag.

“I’ve never seen a discrepancy that large before,” said Aaron Fischer, an analyst at CLSA in an interview with the Wall Street Journal.

Many customers travelled overseas to get luxury bags at a lower price. Asian customers had ample reason to make a trip to Europe to buy a Chanel bag: the cost difference was almost equal to the cost of the plane ticket.

The problem was that many sold the bags they purchased in Europe on the black market when they returned. On a Chinese e-commerce site, Chanel’s 11.12 bag was offered for 31,000 yuan ($4,946).

Chanel took the weakened euro as an opportunity to win back customers from illicit markets.

The low value of euro allows the company to profit even if the prices are cut in Asian nations. Moreover, lower prices will attract more customers.

Its Korean stores are already seeing the benefit.

Other luxury brands are likely to be influenced by Chanel’s move, especially since some customers have turned their backs on major brands that kept increasing their price over the last 10 years.

Avery Booker, a retail consultant at China Luxury Partners in New York, forecast that “other brands will follow Chanel’s lead,” in an interview with the Wall Street Journal.

Korean who bought Chanel products just before the price cut can get compensation.

“Customers who bought our bags after March 2 are eligible for refunds or credits for Chanel products,” said a Chanel Korea official. The company’s stores including duty free stores began refunds from Wednesday.

As a result some customers who returned items they purchased in the first 15 days of this month repurchased the same item at a lower price.

The company said it has not decided on a policy for customers who already left the country.