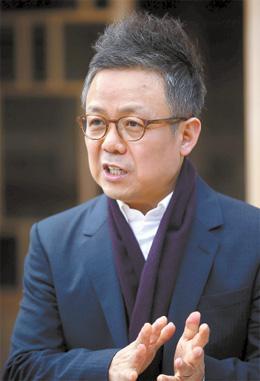 High-minded discussions concerning philosophy, theology, history and physics might sound like luxuries in this competitive society, where most college graduates are forced to engage in a stifling competition for a handful of jobs at giant corporations.

Therefore, many claim that public education would be better of gravitating toward practical skills like software development and programming.

So the aim of the publicly funded education program Gunmyungwon - or the Future New School in English - which pledges to teach and discuss various topics based on humanities and natural sciences, might appear to be somewhat of an antithesis to the above argument.

But Bae Cheol-hyun, a theology professor at Seoul National University who organized the project, argues that future talents must have a firm grounding in those subjects to better lead the country.

Eight professors including Bae, whose expertise range from philosophy, neurology and space design, will teach a select group of 30 people aged between 19 and 29 pro bono.

The class is set to take place over four hours once a week at an institute to be named after the program. More than 900 young people have since applied for the one-year course, completing different types of essay exams.

The JoongAng Ilbo recently sat down with professor Bae to discuss his vision and the program’s role.

Q. Why the name Gunmyungwon?

A. The name refers to a foundation that generates bright light. We hope that young individuals from different backgrounds come and set up their own playground where they can come up with new ideas.

Is there any model institute or school that you try to follow?

No. We [the eight professors] started with the desperate fear that Korea would go down the same road as the Philippines and Argentina if nothing was done. If Korea is to move toward the next phase of development, we need a new kind of higher education.

How will you teach the humanities?

Humanities education is intended not to stick to old traditions. Rather, it should be aimed at finding and exploring a new way that has never been taken. We wanted to make a place where people just speak and discuss anything. Korea can take a leap forward only when each person seeks to be more intellectually independent.

What led the program to converge different disciplines like art, humanities and science?

Innovative thinking can be achieved when the base of those three disciplines is sound. British scientist and novelist C. P. Snow wrote a book titled “The Two Cultures.”

He sensed this deep division between scientists and humanities scholars and lamented the fact that he was not able to communicate well with a scholar on Shakespeare from Oxford University. The Shakespeare scholar didn’t know about calculus, while [Snow] was ignorant about literature. Snow wrote the book out of fear that the United Kingdom could collapse if things go like this. If Korea is to make further progress, we need well-rounded talent who are well versed in science, literature and art.

Why the age limit?

At first, we set the range between 15 and 25. But we thought there could be problems for minors. This is why we have age limitations. Also, 19 to 29 is ideal for thinking differently and realizing what is inside. The program is not focused on teaching. Instead, we will foster ideas and self-reflection.

Who were accepted to the course?

We didn’t take any results from standardized tests. Half of them are college students and the rest office workers. Professions vary - from producers, journalists, to those in Internet and communication technology (ICT). We also have a Chinese student and a North Korean defector.

More than 900 people applied. What do you think is the reason for its popularity?

I think that young people are indicative of current times. For them, the name of the college and the company doesn’t carry the importance it once did. They want to find what makes life meaningful or what makes them happy. This seized on those desires.

What can the courses at Gunmyungwon deliver?

Gunmyungwon will be meaningful if each student can find a way to be happy. It will be worthwhile if one can find that way on his or her own. The fate of Korea depends on whether young people can find that. It doesn’t really matter what they do after the course. But it is important for them to come up with their own road maps for their lives.

What is the objective of the classics reading course taught in Latin and Chinese?

The best-selling books over 1,000 years can be called classics, and the best-selling books over 2,000 to 3,000 years can be considered scripture. The classics and scripture contain something that strikes a chord with people. The program let its members read those books in their original languages, hoping that they will feel their feelings as closely and vividly as possible. Reading classics can also make people feel that they are inside a small, calm prayer room. People can find solace in it.

What is the problem with college education in Korea?

College education in Korea lacks the ability to capture and meet current demands. Professors won’t need to deliver content from old textbooks to students, because a single smartphone is smarter than all the students at Seoul National University combined. That gadget has more knowledge and information than any of us. Still, universities want to admit those who excel at memorizing. We need to think more seriously about how to choose students who can think outside the Wikipedia box.

You once mentioned that the people involved in this project want to offer similar courses to the president and current lawmakers. Why is that and what kind of the class would you offer?

If they [President Park Geun-hye and the Blue House] accept the offer, we would be willing to give a lecture once a week. But here we don’t want to focus on teaching a specific subject. Rather, we want to instill an analytical perspective that can help them observe certain phenomena objectively. One-hundred years ago, the United States was not as big and influential as it is today. What led the country to move forward was deep and thorough contemplation by the country’s leaders. A leader should maintain a disciplined composure so that he or she can keep thinking and remain flexible.