Dempsey flies to Tokyo and Seoul

Dempsey flies to Tokyo and Seoul 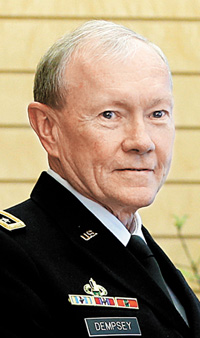 Gen. Martin Dempsey, chairman of the U.S. Joint Chiefs of Staff, said on Tuesday that Korean and Japanese participation in a U.S.-led integrated missile defense regime will be a key topic to be discussed ahead of his visit to the two Asian countries.

Dempsey said that Washington is “making progress on building an integrated air and missile defense umbrella,” in an interview as he flew to Japan, according to the Pentagon.

“Both the Koreans and the Japanese have made some commitments in procurements on their side to make us more interoperable,” he said.

Washington has pushed for trilateral security cooperation between the United States and its closest East Asian allies, Seoul and Tokyo, as well as exchanges of information especially against North Korean nuclear and missile threats.

Dempsey’s Asia visit comes as Seoul faces a sticky dilemma over placement of a U.S.-made Terminal High Altitude Area Defense (Thaad) system on the Korean Peninsula despite opposition from China and Russia. Washington and Seoul claim there have been no official talks on the deployment of an anti-missile defense battery in Korea.

Dempsey said he will speak with military and political leaders in Korea and Japan, adding it is “important for us to get their insights into the way they see the region evolving, so then we can collaboratively continue to adapt our relationship.”

At the end of last year, the three countries signed a trilateral pact agreeing to share military intelligence on North Korea to bolster their defense posture. Because of tense diplomatic relations between Japan and South Korea, Washington is expected to act as an intermediary.

On Thursday, Dempsey will visit Korea for three days to hold talks with the Korean Joint Chiefs of Staff (JCS) chairman, Adm. Choi Yun-hee, and Defense Minister Han Min-koo. Despite speculation that the Thaad issue will be raised during these talks, Korean defense officials have denied it will be on the official agenda.

Dempsey added that in Seoul he will also discuss transferring wartime operational control of troops to South Korea, training exercises and how to respond to North Korean provocations.

Dempsey’s visit comes during the joint U.S.-Korea military exercises that kicked off this month and will last until April 24, which North Korea opposes.

Adm. Cecil Haney, the commander of the United States Strategic Command, said in a Pentagon briefing on Tuesday, “I know that there are some discussions that are going on with Thaad today. I’m not going to get in front of those discussions.”

The Thaad system is supposed to defend South Korea from North Korean nuclear and missile threats and possible deter them.

Haney continued, “I think South Korea has to determine what it needs.”

U.S. Secretary of Defense Ashton Carter is also expected to visit Korea and Japan early next month, according to government officials in Seoul.

This comes after Carter’s first phone conversation with his Korean counterpart, Defense Minister Han, since he became Pentagon chief.