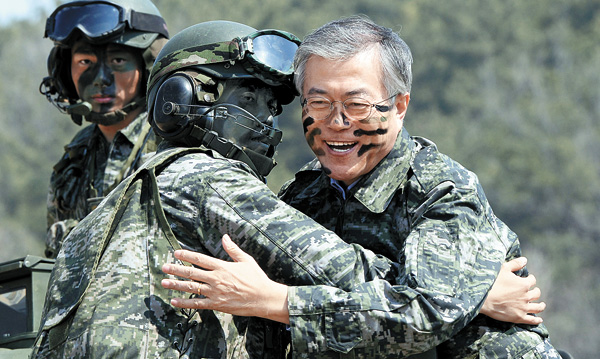 Moon Jae-in, right, chairman of the main opposition New Politics Alliance for Democracy, gives a hug to a soldier after he took a ride on an armored vehicle at the Marine 2nd Division in Gimpo, Gyeonggi. on Wednesday. [NEWSIS]

A day before the fifth anniversary of the sinking of a South Korean warship, New Politics Alliance for Democracy (NPAD) Chairman Moon Jae-in acknowledged for the first time that the Cheonan sinking was due to a torpedo attack by a North Korean submarine.

Moon made the remarks as he spoke with naval officials during a visit to a Marine Corps unit in Gimpo, Gyeonggi.

Moon told them that five years ago, “A North Korean submarine suddenly came in and attacked the Cheonan,” according to Kim Young-rok, spokesman of the main opposition NPAD, on Wednesday.

On March 26, 2010, the South Korean Navy corvette sank off the west coast in the Yellow Sea, killing 46 sailors.

A joint investigation by the South Korean government and international experts concluded in May 2010 that a North Korean midget submarine was responsible for torpedoing the Cheonan.

But this is the first time Moon or the liberal NPAD has explicitly blamed Pyongyang for the sinking. Moon said that a North Korean submarine “after striking the Cheonan escaped to North Korea, but we were unable to properly detect this.”

Moon was responding to a remark made by Yoo Seung-min, floor leader of the ruling Saenuri Party, who said Tuesday, “The NPAD has shown an ambiguous understanding of the matter of the Cheonan sinking. A clear acknowledgement that the sinking of the Cheonan was an act by North Korea is the start of a political party that recognizes security.”