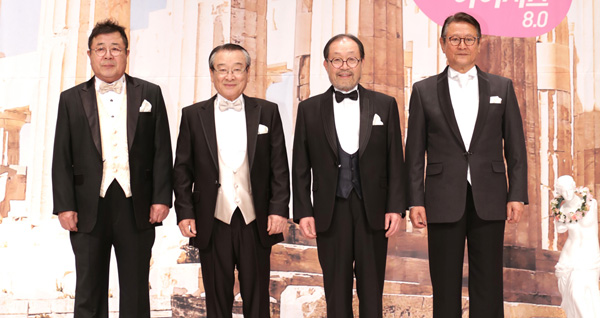 The four famous grandpas - Lee Soon-jae, Shin Goo, Park Geun-hyeong and Baek Il-sub - have reunited to take on another travel mission. This time they are off to Greece, newly joined by Korean Wave pioneer Choi Ji-woo and their usual luggage carrier, Lee Seo-jin.

In the fourth edition of tvN’s reality show “Grandpas Over Flowers,” produced by Na Young-seok, the six members took off on a 10-day journey to the Mediterranean country, stopping by Dubai along the way.

“The most important thing in selecting our next destination is what the grandpas want,” said Na during a press conference on Tuesday in Yeouido, western Seoul.

“We gather around once or twice a year to have dinner, and every time I asked, the grandpas said they wanted to go to either Greece or Cuba,” he explained. “Greece was a more suitable choice considering the location and weather.”

When Lee Seo-jin was asked about what it was like to travel with Choi, he said she has two sets of skills he doesn’t have that came in handy.

“I am not an affectionate kind of a guy, so if it weren’t for Choi the five of us guys would’ve just sat around in the desert looking at the sunset without saying anything,” said the 44-year-old actor. “But Choi really perked up the ambience a lot, and that was a big relief for a change.” 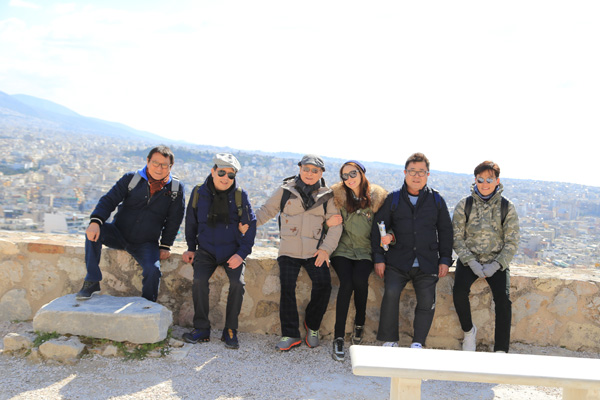 Actress Choi was reportedly picked by Na because she had great chemistry with Lee Seo-jin when she appeared as a guest in Na’s show “Three Meals A Day.”

It surprised the public when she showed up at the airport without any prior notice to the media last month ahead of the cast’s departure to Greece.

“The exhausting stuff was all done by Lee. I was just a mood maker,” said Choi.

The two younger members of the show seemed to have gotten along fine on everything except for money management.

“Everything was perfect with Choi, except that she kept forgetting that we were on a backpacking trip, not a private trip. She started to spend too much,” Lee said with a laugh.

Choi instantly shot back, saying she was just “asking for the allowance that was allotted to her.” The 40-year-old actress jokingly asked the viewers to judge whether she was splurging or not.

The eldest grandpa, Lee Soon-jae, 79, said he was surprised at how prepared Choi was.

“She had studied the language and had done a lot of research about our trip,” he said. “She was very good at homemaking, too. I wish I had a daughter-in-law like her.”

This is the fourth trip for the senior actors - with Baek, 70, being the youngest - to team up. The first trip took place in 2013 when the buddies and Lee went to France and Switzerland.

However, the frankness of the four, who sometimes express themselves through grumbles while other times showing genuine appreciation during their experiences, soon made the show immensely popular.

“We’ve been to four different destinations, but we are practically showing the same thing,” said Na. “There is nothing extraordinary about us traveling. But I think the viewers keep supporting us because we are showing something that is very ordinary.

He added that he hopes the viewers will perceive the show as if it is a short drama series that comes back every year. 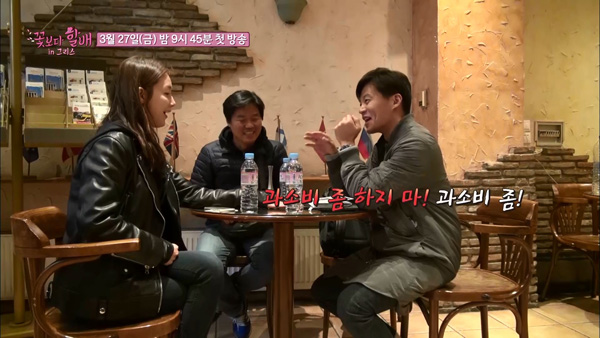 “We put a lot of effort into it,” Na said, “but I hope the viewers will watch it with a very relaxed mind.” 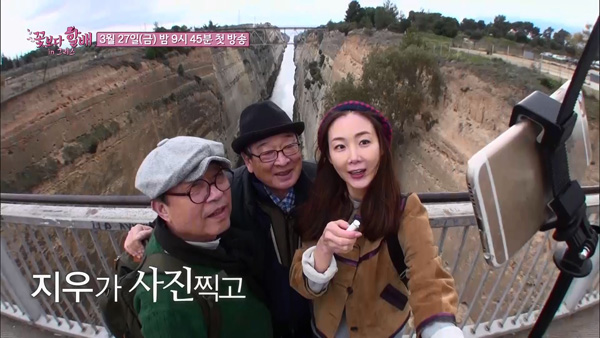 The first episode airs on Friday at 9:45 p.m. through cable channel tvN.