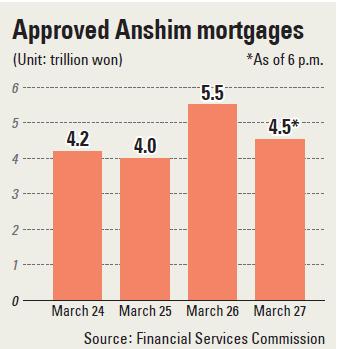 As of Friday, the Financial Services Commission (FSC) decided to approve all applications to convert higher-rated mortgages to the new government-backed mortgage program.

The FSC made the decision despite controversial 5 trillion won ($4.5 billion) monthly and 20 trillion won annual ceilings that critics say will not be able to satisfy the high demand.

The FSC mortgage program, called Anshim Jeonhwan Daechul (which translates to “converting to a safer mortgage”), designated 16 commercial banks to carry out the program on Tuesday. The FSC designed the program to help borrowers reduce interest payments.

FSC initiated Anshim Jeonhwan Daechul to have the effects of benchmark interest rate cuts trickle down to the working class and allow them to switch from a floating rate mortgage to a government-guaranteed fixed rate.

The new mortgage plan offers interest rates between 2.55 and 2.6 percent in 10-, 15-, 20- or 30-year terms. The new interest rates are an estimated average of 1 percentage point less than prevailing rates.

The FSC issued a press release on Friday at 3:30 p.m. to ease public anxiety.

“Applicants who visited the bank on Friday will receive approval for loans regardless of the annual ceiling as long as they satisfy the required conditions,” said the FSC.

The FSC is planning to announce the revised details on Sunday at 2 p.m.

Additionally, analysts had predicted the FSC will modify their decisions on the monthly and annual limits, and expand the programs to riskier credit companies.

“The government was in a hurry to come up with a countermeasure against the steep rise of household debt,” said Korea Finance Industry Union Head Kim Moon-ho. “It is true that over a quadrillion won in household debt is a huge risk to the nation and needs a rapid relief measure.”

“Anshim Jeonhwan Daechul is a rushed decision and a lopsided program only benefiting the middle class borrowers,” Kim said. “The banks are confused because they were not given enough time to prepare for the borrowers.”

He also expressed concerns that the responsibility for any confusion caused by the new program will shift from the government to the banks.