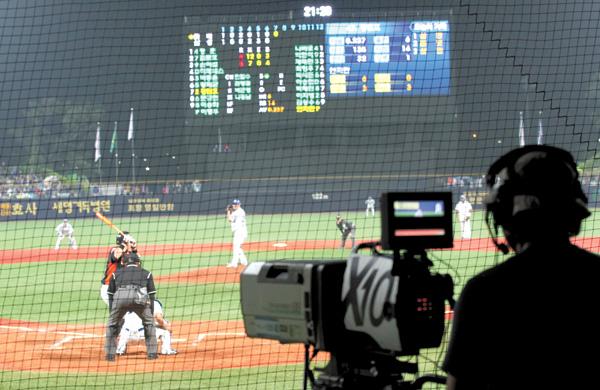 Cho Sung-woon, a baseball fan who lives in Seoul, has been looking for a new cable TV operator because he discovered that his current package does not include any of the five channels that broadcast Korea Baseball Organization (KBO) games.

“I called my cable TV operator, but what they said is to change [my subscription] to the premium package, paying an additional 10,000 won [$9] per month,” said the 38-year-old.

“Last year, I had a basic package for about 7,000 won per month that covered all the baseball games, but now I have to pay more.”

The new season of the baseball league started over the weekend, but fans like Cho are afraid of missing games as a result of KBO’s new broadcasting deal.

As KT Wiz is joining the top division this year, creating a 10-team league, five games a day are being broadcast.

But because the terrestrial channels cannot regularly show baseball matches as they have their own schedule of programs to air, viewers need access to at least eight channels to watch all the games throughout the season.

The KBO did not face trouble completing an early deal with the three basic terrestrial channels, which formed a consortium to buy the viewing rights with the aim of selling licenses to other networks.

The consortium picked Eclat Entertainment to manage the resale.

Selling licenses to the three main sports cable channels went smoothly for Eclat because they were affiliates of the public channels, but difficulties arose when it tried to find other networks.

According to Eclat’s representatives, the agency contacted XTM, which was a baseball broadcaster last year, but the channel forfeited the deal, explaining that it had to ensure there was a balance between earnings and expense.

It eventually landed a deal with Sky Sports and SPOTV+, an Eclat affiliate.

However, since the two channels are usually not included in the basic packages of cable TV operators, fans have been complaining to the KBO that it is making it difficult for them to watch baseball.

The situation has also created extra work for clubs because they have to make sure those channels are accessible to reporters and KBO officials during all games at baseball stadiums, as they often have to check what is happening in other games.

Experts say that although broadcasting deals for professional baseball have nearly doubled from 18 billion won last year to 35 billion won this year, access to these games has decreased.

“The KBO should not only think about increasing profits, but also about how fans can enjoy baseball on TV without difficulties.”

However, compared with other sports, the broadcasting situation for the KBO is much better as it can at least collect a large amount of money. The broadcasting deal for the K-League Classic, the nation’s top football division, reportedly accumulates one-fifth of the profits baseball does.

According to experts, not only does football have lower audience ratings, difficulties in procuring and allocating advertisements also mean its broadcasting deals are not particularly lucrative.

Thanks to the request of KBS analyst Lee Young-pyo, who was member of the national football team during Korea’s semifinal run in the 2002 World Cup, KBS, Korea’s national broadcaster, has started to broadcast K-League Classic matches through its KBS1 channel this season.

“From next year, I heard that K-League will cover some of KBS’s production costs,” said a football official who asked not to be named due to the sensitivity of the issue.

“The public channel getting separate payment for production could cause many people to misunderstand.”

The football community, however, is hoping for a better future because more fans are starting to pay attention to the sport thanks to each club’s aggressive marketing. As a result, the Korea Football Association decided to include the K-League Classic as part of its negotiations in broadcasting deals for national team games.