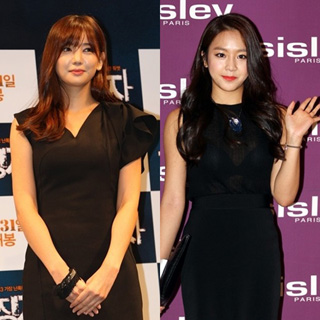 The ratings of popular reality TV show “We Got Married” dipped below 4 percent on Saturday after a video clip leaked on Friday revealed what really happened between actress Lee Tae-im, left, and singer Yewon, a member of the program.

Before the video clip became available on YouTube, local media reported earlier this month that Lee had cursed and yelled at Yewon during a shoot for “Tutoring Across Generations” on Jeju Island in February.

When the story broke, the public largely sided with Yewon over Lee because several reports suggested that the actress’s behavior was uncalled for.

Right after the scandal, Lee’s agency said that Lee was angry at Yewon for not using honorific language.

In Korea, honorific language is expected to be used by younger people when they are addressing their elders.

But Yewon’s agency asserted that the singer did use honorific language with Lee, who is three years older than her, during the production of the show.

However, the leaked video clip shows that although Yewon largely uses honorifics, she also addresses Lee in a very casual and impolite way during their conversation.

Because of the scandal, Lee decided to leave the reality TV show and another TV drama series in which she was appearing.

Many viewers of “We Got Married” wrote Internet posts urging Yewon to depart from the show over the weekend.

On Saturday, “We Got Married,” in which celebrities pair up and experience what life would be like if they were married, earned a 3.9 percent viewership rating, lower than the previous week when the show achieved 4.8 percent of viewership.

The show recently changed part of its cast, marking a new season, and Yewon is one of its new members.

Responding to the calls for Yewon’s departure, the production team behind the reality TV program said that nothing has been decided so far.