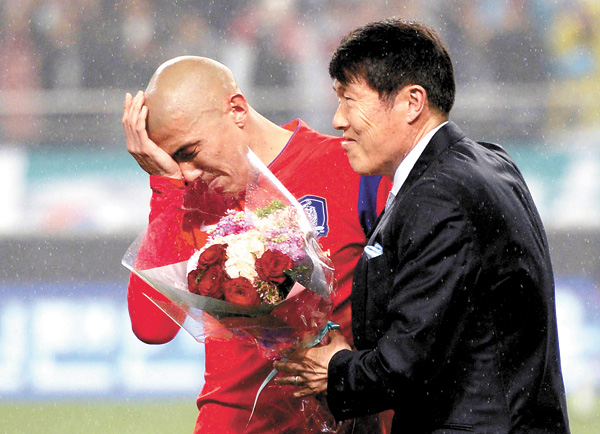 Cha Du-ri, left, is comforted by his father, Cha Bum-kun, during his halftime retirement ceremony. [NEWSIS]

His father, Cha Bum-kun, was like a wall Cha Du-ri couldn’t overcome and a shadow that covered him. But the 34-year-old says his father is the reason he had a successful football career and was able to retire from the national team after 14 years.

Seoul World Cup Stadium on Tuesday was the scene of a friendly match against New Zealand and Cha’s last appearance with the Taegeuk Warriors. National team coach Uli Stielike gave Cha the captain’s armband to start the match and replaced him in the 43rd minute with Kim Chang-soo.

As the FC Seoul right back left the pitch, there was a banner reading “Thank You, Cha Du-ri” and 33,514 fans gave him a standing ovation. New Zealand players joined the applause.

For his retirement ceremony at halftime, Cha wore a special uniform designed by the Korea Football Association with his name and number printed in gold. After a tribute video, the former Celtic and Bayer Leverkusen player burst into tears at the side of his father, the person he most loves and respects. 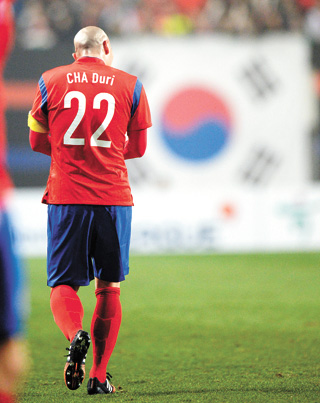 Cha’s younger teammates also kept their promise to him, delivering a 1-0 victory. In the 86th minute, Jeonbuk Hyundai Motors midfielder Lee Jae-sung scored on the rebound of a shot by Kim Bo-kyung that was blocked by New Zealand goalkeeper Stefan Marinovic. It was his first international goal.

After all, Cha, who was known as “son of Cha Bum-keun,” left the ground as “footballer Cha Du-ri.” In a press conference after the match, Cha, a member of the Korean national team that reached the semifinals in the 2002 FIFA World Cup, emphasized that he is a happy man.

Q. What thoughts passed through your head when you cried at your father’s side?

A. I think I’m a blessed man. There are certainly better players who have done a greater job than me. Just look at Park Ji-sung. I’m so sorry, shamed and thankful for receiving much more affection than I should have received. I cried because I realized I’m such a happy player. When looking at my father, many thoughts crossed my mind. I challenged my father’s reputation, wanted to be a better player than him and believed I could do well. But one day, I started to see “the wall” [of my father]. Since then, I enjoyed football and wanted to be happy with football. As I saw my father, I was somewhat relieved because the pressure is off, but at the same time, I blamed myself and was sad that I failed to overcome his reputation.

What do you think about Son Heung-min missing the penalty shot during the game?

I had a feeling that Heung-min would not score on a penalty kick [laughs]. First, players offered to let me be the kicker, but that wasn’t going to happen because I thought winning the game was important and I wanted to keep that intensity. I saw that players wanted to collect a victory right to the end.

It’s a very positive note for the national team when new players like Lee Jae-sung score. The performance of the young K-League player will give hope to other young players. I’m just really thankful to the young players who tried their best to win.

Which national team coach do you remember best?

Guus Hiddink [the 2002 World Cup coach]. He selected a player who hadn’t experienced the junior national team when he was in college to the World Cup team. That’s impossible when you aren’t bold or don’t see the big picture. He evaluated my speed and power and took me to the World Cup.

Which international match do you remember the most?

The quarterfinal match against Uzbekistan in the Asian Cup. Many think I left a big impression with the 60-meter (197-foot) dribble, but for me, it was the game that ... really made me feel that I was a veteran and essential to the national team.

What’s your definition of wearing the national team uniform?

Compared to national teams in Europe and South America, I think we lack depth. We have to find players and foster them with limited resources. Players should take responsibility for developing themselves because that is the same as developing Korean football. For friendly matches like this, they should see them as an opportunity to get more football fans.

What do you think about some people’s opinion that you lack good technique?

I recently saw a reply to some article that said “my physique is like my father, but my foot is like my mother,” which I kind of sympathized with [laughs]. I’m definitely not a player who has good technique.

When I’m training, I get surprised a lot when seeing Koo Ja-cheol, Nam Tae-hee and Ki Sung-yueng. But in my mind, I always thought there was something I could do better than them.

I hope many football fans will enjoy football by seeing and appreciating what a player is good at, instead of evaluating his weaknesses.

What’s your take on the development of Korean football?

I think that our players’ individual skills are really great. After spending time in Europe, I think that saying “I’m doing my best” is a really a big trap. In Europe, doing your best was just a basic thing. When I was a high school student and my father called me after the game, I just answered, “I tried my best.”

During my college years, I gave the same answer, but then he said I shouldn’t just be saying that I played my best, but that I played good. My head went blank after I heard that. But I think that’s the answer. If you look at European football, it’s just part of the basic foundation that players fight for the ball and give everything they have. Players then focus on playing concisely and accurately. If we can do that, I think we will become closer to world level.

Until December, I’m with FC Seoul. But the team recently lost all three of its games in the league. It’s important for me to play well for Seoul to get some wins. After that, I will think about my future. For now, I want to go Germany and earn a coaching license. Of course, it’s not going to happen in a single day. I will learn many things from both outside and inside football in that process. I will have a clear direction as I learn various things.

.April 20, 2002 - First goal, after receiving a pass from Ahn Jung-hwan during friendly against Costa Rica.

.June, 18, 2002 - Made a good impression in the World Cup with an overhead kick against Italy during the Round of 16.

.Jan. 22, 2015 - Aggressively penetrated from the right flank and assisted Son Heung-min’s goal in the second half of extra time against Uzbekistan in the Asian Cup quarterfinals.