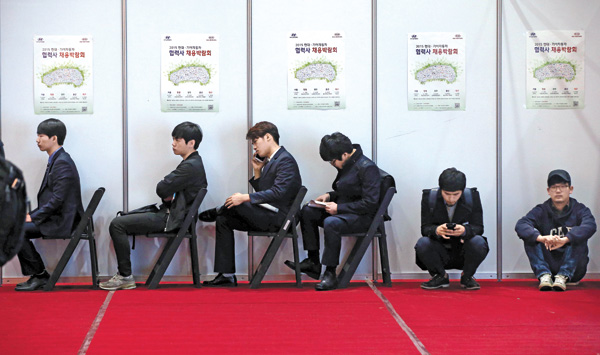 Applicants waiting in line for their job interview at a job fair held last week at Coex, southern Seoul. Jobs situation especially for the younger people have been tough. [NEWSIS]

Not surprisingly, labor reform negotiations aimed at structurally changing the labor market in hopes of creating a foundation for more solid long-term growth, failed to meet a Tuesday deadline as the three parties - government, business and labor - had trouble settling their differences. The talks lasted for nine hours, until 2 a.m.

The three parties resumed discussions at 4 p.m. Wednesday, but the situation felt like deja vu by 8 p.m. 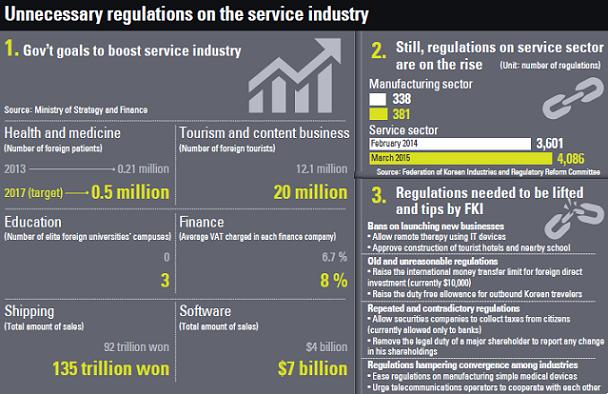 Labor unions are unyielding on details over five major issues, including easing procedures for termination of employees and extending work periods for contract workers. They argue that such changes will only increase the number of irregular workers who are paid less and receive fewer welfare benefits. The Korean Confederation of Trade Unions, which is not participating in the talks, concluded the effort to reform the labor market structure was a failure and decided to go on a series of relay strikes this month.

Business representatives also are not backing down on several issues, including the government’s proposal to double the maximum number of years for contract workers’ to four, while banning the use of dispatched workers in the manufacturing industry. They also oppose the proposal to allow labor unions to participate in management as well as hand out retirement paychecks to those who work at least three months. 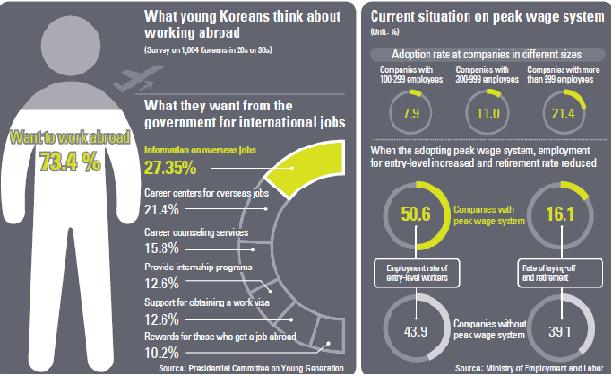 The urgency in reforming the labor market is clear, as even President Park Geun-hye during the cabinet meeting on Tuesday urged the three parties to reach an agreement for the country’s future.

“[We] expect a fruitful result could be made when [each party] would give in a bit with a desperate attitude that this could be our last opportunity,” Park said.

With reform issues surrounding the Korean labor market, a string of labor specialists gave various pieces of advice to the Joongang Ilbo on how unions and management can reach an agreement.

They also said a lack of compromise was the reason for continuing negotiations over labor disputes, and added the unions would have to accept the peak wage system adoption, while management would have to raise the retirement age and create more entry-level positions.

The specialists called the current uncompromising situation the “prisoner’s dilemma.”

“Since it is difficult to reach a consensus on labor market reform, the government should be actively engaged in the matter,” said economics Prof. Jo Jun-Mo of Sungkyunkwan University.

Jo also said labor unions are only calling for stable employment, while management is talking about flexibility in the labor market.

The 1982 Dutch Wassenaar Arrangement, which allowed employers to shorten work hours in return for freezing wages, was a successful resolution.

Analysts indicated the Dutch government pushed unions and employers to reach an agreement by rallying public demand for reform. The government also threatened to abolish some social welfare benefits whenever either party protests the government’s action.

The 2002 German Hartz reform was another successful case in which the government accepted a set of reform plans recommended by 15 labor specialists, in spite of surging unemployment and high welfare spending. Succeeding administrations have since carried out an unrevised reform plan.

The specialists also advised the government to ease unnecessary service industry regulations in response to China’s success in reducing youth unemployment following its deregulation. However, several deregulation bills are still pending in the National Assembly despite potential job creation from a service market deregulation.

Sil Sin is a Korean term referring to an unemployed youth with poor credit.

A new labor law would require companies with more than 300 employees to raise the retirement age to 60 in 2016. To ease the burden, specialists have recommended that employers adopt the “peak wage system,” which allows companies to cut salaries at a certain age to guarantee jobs.

A few conglomerates and state-run companies already adopted it.

The Ministry of Employment statistic say 9.4 percent of companies with more than 100 employees have adopted the policy.

The Ministry of Employment and Labor said bigger companies are more likely to adopt the system, with 21 percent of businesses with more than 1,000 employees carrying it out, while the rate dropped to 7.9 percent among companies with less than 300 employees.

Nearly 73 percent of companies without the system announced no intention to adopt the system.

Analysts say the peak wage system not only guarantees jobs for middle-aged people, but also creates more jobs for young people, as the system could create more entry-level jobs by cutting pay for higher-ranked employees.

While the plan appeared to create more jobs and boost the local economy by attracting foreign fans of K-Pop, the government rejected the plan. The government said the planned hotel construction site violated current laws as it was near a school.

Despite requests for revision of the law in addition to promises not to build any bars or clubs in the area, the government did not surrender.

An analyst said the government should support job-creating industries, such as service businesses, in order to address youth employment.

According to a Korea Economic Research Institute analysis, easing some service regulations in the education, medicine, legal and software and digital content sectors could create up to 350,000 jobs by 2020.

At a March 2014 Cabinet meeting, President Park Geun-hye promised to ease regulations and increase funding in those sectors.

“Unnecessary regulations are an enemy and a lump of cancer cells that need to be removed,” the president said.

However, since the meeting, the number of service sector regulations in those sectors has risen from 2,199 to 2,544 as of last month.

“The government should lift some regulations on long-term oriented service businesses, so that young job-seekers can demonstrate their creativity there,” said Federation of Korean Industries Future Industry Department Director Kim Tae-yoon. “The National Assembly also needs to grasp the seriousness of the regulations.”

Although rejected by all, he has yet to apply for small or medium-sized companies.

“So far, I have failed to get a job mainly because I spent many years preparing for the bar exam without building up my ‘specs’ (skills and certificates needed in job applications),” he said. “But I don’t intend to give up on applying to conglomerates.”

Analysts said youth unemployment is largely due to the unwillingness of university-educated Koreans to work for SMEs, which pay lower wages and provide less compensation.

According to a poll done by the Presidential Committee on the Young Generation, 75.2 percent of participants in their 20s said they were qualified for decent jobs, while 66 percent of university-educated participants said they intended to get a job at either conglomerates or state-run companies.

The pool for decent jobs is still small as only 10.4 percent of young job seekers get a job at companies with more than 300 employees, according to statistics.

“After acquiring abilities and networking skills abroad, they can also contribute to new markets around the world,” said Presidential Committee on the Young Generation Chairman Shin Yong-han.

On March 19, Finance Minister Choi Kyung-hwan also said he would offer support to young Koreans seeking overseas jobs by hoping to increase the number of young job seekers hired by overseas companies from 5,000 to 10,000 by 2017.

The Park Geun-hye administration is eyeing the Middle Eastern market, citing its recent policy dubbed the “creation of the second Middle East boom,” as the countries are struggling to find talented workers for their promising industries.

“The second Middle East boom will become an opportunity to create jobs for youth with specialized high-end skills and abilities such as those regarding nuclear energy, cutting-edge medicines, and IT.”