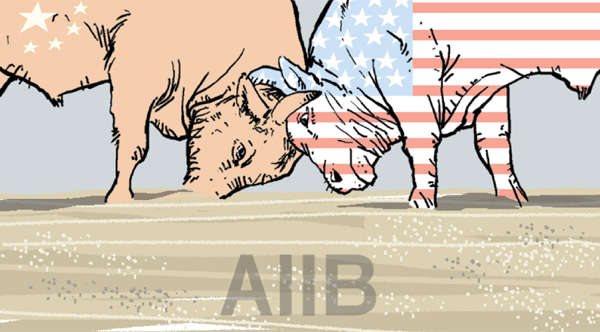 While most of the world is focused on the challenges to the U.S. in an increasingly fluid Middle East, a once-unthinkable phenomenon is playing out in Asia.

Having failed to kill the Chinese-led proposal to create an Asian Infrastructure Investment Bank (AIIB), the U.S. is now being openly defied by a growing number of its allies as they signal their intention to join this new institution.

U.S. opposition to an Asia-focused organization isn’t new. In the late 1990s, it confronted a regional initiative to establish an Asian Monetary Fund.

Even then, the motivations of the two sides were similar to those that drive them today. Countries in the region were extremely dissatisfied and angry about their treatment by the existing, Western-dominated institutions (particularly the International Monetary Fund, which had assumed huge influence with the 1997-98 Asian financial crisis).

As now, U.S. opposition to a new Asian institution reflected concerns about the fragmentation of the existing multilateral system and the loss of influence that would ensue.

This time, China is leading countries rebelling against the glacial pace of reform at the institutions that arose from the Bretton Woods system, the IMF and the World Bank.

Through the combination of the proposed AIIB, a new development bank and mushrooming bilateral arrangements, China is slowly building small pathways to bypassing the longstanding institutional arrangement. No wonder the U.S. is again worried about the erosion of the existing Western-dominated multilateral system (in this particular case, the World Bank) where its influence is still considerable, if not determinant.

But even though the motivations of both sides are similar as in past, this time, outcomes may be very different.

Although the U.S. was forced to yield on some small points to help Asian nations save face, it succeeded in quashing the Asian Monetary Fund a little more than 15 years ago. Now, it is finding it much more difficult to get its way.

In recent days, Australia, a steadfast U.S. ally, signaled its intention to participate in the AIIB. It joins several European countries and a number of emerging economies that have already defied U.S. wishes, suggesting that the creation of the new institution is almost a done deal.

The U.S.’s inability to impose its will reflects both domestic and international factors.

Along with Europe and Japan, the U.S. has become more inwardly oriented as its economy continues to emerge from the global financial crisis. This has occurred in a context of political polarization that tends to paralyze even the most basic elements of economic overnance, such as enacting an annual budget.

Globally, the economic realignment of recent years has led to the emergence of a more confident and assertive China. And unlike most Western economies, China is willing to devote considerable funds to regional initiatives.

Meanwhile, the global economic influence of the U.S., especially in international institutions, has been weakened by the repeated blockage by Congress of a set of relatively minimalist reforms to the IMF that have already been approved by the majority of the fund’s 188 members. And this even though the U.S. spearheaded the reform effort, which neither dilutes America’s voting power nor imposes additional funding.

The U.S. may well have to consider a change in strategy. Rather than steadfastly opposing the AIIB, it may make more sense to join the institutions and work with other members to ensure strategic coherence and effective operational rules.

Doing so would increase the likelihood the AIIB would be designed as an efficient supplement to existing institutions, rather than a costly substitute. It would also improve the prospects that this new institution would internalize the World Bank’s past mistakes and adopt more modern tools of development.

The U.S. challenge doesn’t end there. The AIIB setback is another illustration of the extent to which dysfunction in Congress is doing more than just holding back America’s economic growth and prosperity. Combined with the damaging opposition to IMF reform, it is also continuously eroding the U.S.’s global economic influence. The longer this persists, the greater the costs to an economy that still runs well
below its potential, and that now risks seeing this potential erode.

*The author is the chief economic adviser at Allianz SE. He’s chairman of Barack Obama’s Global Development Council, the author of best-seller “When Markets Collide,” and the former chief executive officer and co-chief investment officer of Pimco.