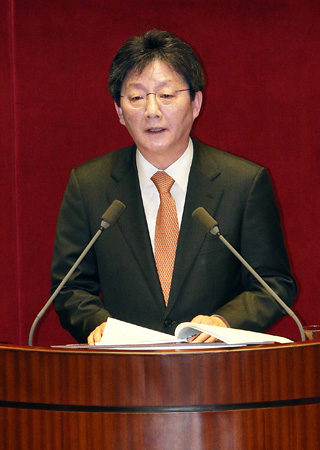 Yoo Seong-min, the floor leader of the ruling Saenuri Party, addresses the plenary session of the National Assembly on Wednesday. By Kim Sang-seon

Ruling party floor leader Yoo Seong-min on Wednesday called for lawmakers to discuss a tax increase in order to cover funding shortages and widening welfare coverage, arguing that the oft-touted slogan for “welfare without a tax increase” was nothing but “empty words.”

In a parliamentary address on behalf of the ruling party, the Saenuri’s No. 2 said the government must come to the negotiating table with lawmakers to find a way to increase taxes to fund ever-expanding welfare programs at a time when combined budget deficits over the past three years stand at 22.2 trillion won ($20.2 billion).

“The political circle must be honest with the people [in admitting that welfare without an increasing tax burden is impossible]. We need to look for answers for the future by openly discussing the problems associated with taxation and the welfare system in this country.”

Yoo, who earned his doctoral degree in economics from the University of Wisconsin-Madison, continued that discussions over a tax hike should be based on the principle that those who earn more ought to pay more in taxes. Corporations, he added, should also not be exempt from paying more in corporate taxes.

“We need to move forward to becoming an advanced country by requiring major companies to pay their taxes in accordance with their financial capabilities so that they can be respected,” the Saenuri floor leader said.

Yoo’s remarks on a tax increase come as the Park Geun-hye government has maintained its stance on leaving the tax system unchanged, refusing a tax hike under its five-year term.

The government has staunchly kept its position despite growing calls from both the ruling and opposition parties for a tax increase to balance the budget.

In what was seen as another surprisingly honest turn, Yoo said on Wednesday that the Saenuri’s pledge to not increase taxes, made during the 2012 presidential election, was a promise it “cannot keep anymore,” adding that the Saenuri had “reflected on itself” - a direct rebuttal to the Blue House’s long-standing position.

However, the Park administration has insisted that it can collect additional tax revenue by cracking down on the underground economy and revitalizing the mainstream economy, in spite of criticism from the main opposition New Politics Alliance for Democracy (NPAD).

The Saenuri has also recently hinted that a change in tax policy direction is needed.

In an address in February before the National Assembly, ruling party Chairman Kim Moo-sung stated that expanding welfare without a tax increase was “nothing but a lie.”

To cut down on national debt, Yoo also called on the main opposition to cooperate with the Saenuri in the ongoing parliamentary session this month to reform the debt-ridden pension system for government employees.

“According to the 2014 national budget white paper, of the 1.2 quadrillion won in national debt, 53 percent, or 644 trillion won, has come from the money borrowed to maintain pension rates for government workers and military servicemen and women. We all know how serious the country’s future problems could be [if we leave the current pension program unchanged],” the three-term lawmaker said.

He also called on the government to salvage the sunken Sewol ferry from the sea floor in waters off Jindo County, South Jeolla, adding that the country needed to display a sense of unity in spite of discord over what to do with the ship, which capsized last April, leaving more than 300 people dead or missing.

“I urge on the government to wrap up its technical review for the salvage operation and lift the Sewol ferry if it is deemed feasible. The government must keep its promise that it will work until the last victim of the sinking is found in order to alleviate the loss felt by the victims’ families.”

Yoo continued that the public would consent to the salvage operation, estimated to cost more than 100 billion won, if the government sought understanding and consensus.

His support for the salvage of the Sewol ferry came eight days ahead of the first anniversary of the disaster, in which 295 people were confirmed dead, mostly high school students en route to Jeju Island for a school field trip.

The remains of nine victims are still missing.