Wiz feel wonderful after victory No. 1

Wiz feel wonderful after victory No. 1 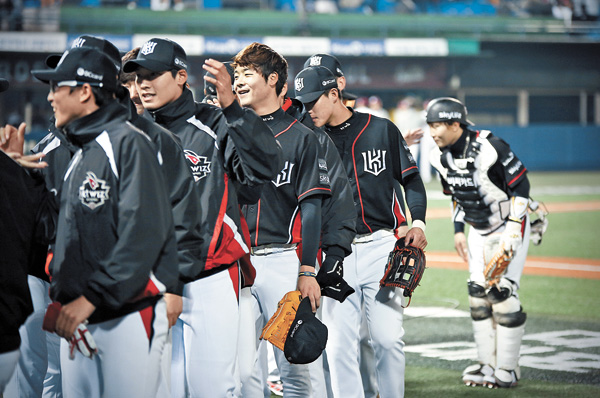 KT Wiz players celebrate after the first win in franchise history, which came Saturday against the Nexen Heroes at Mokdong Baseball Stadium. The Wiz beat the Heores, 6-4. Provided by the Wiz

For the KT Wiz, the rookie club in the Korea Baseball Organization (KBO), April 11 will be remembered as the day the Suwon franchise won its first game.

The Wiz on Saturday beat the Nexen Heroes, 6-4, at Mokdong Baseball Stadium in Seoul.

And after starting the season with 11 straight losses, the Wiz wasted no time starting a new streak with a second straight win over the Heroes, 5-3, on Sunday.

Unfortunately, the four combined to strike out eight times in a 6-0 loss.

For the Saturday game, Cho decided to go in the opposite direction.

The right fielder and designated hitter were 26-year-olds Kim Sa-yeon and Kim Dong-myung.

At first base was 36-year-old captain Shin Myung-chul.

And on the mound was 37-year-old American starter Chris Oxspring, who held the Heroes scoreless on three hits until the seventh inning.

The Wiz’s team batting average with runners in scoring position this season had been only .177, but on Saturday it was .286. Even Yong, who was hitting .100 going into the game, had an RBI single.

Shin, 36, extended the team’s lead to five runs in top of sixth inning as he delivered a squeeze play.

The captain said that after the Wiz’s 11th loss in a row Friday, he gathered veterans for a meeting and made a promise.

“As time went by, the pressure [for the first win] was snowballing,” said Shin, who previously played with the Lotte Giants and Samsung Lions. “We just said to ourselves that we should not get intimidated, but relax, have fun and enjoy the game, pretending we had not lost 11 in a row.”

Shin especially thanked fans for their enthusiastic support, despite the team’s rough start in its first season.

“After our win, I saw some fans crying,” he said. “I was thankful and sorry at the same time, but it was a moment that you couldn’t ever feel with other teams. It was the kind of feeling that you can only have with a rookie club.”

For manager Cho, the team’s first victory also held special meaning. The 54-year-old, who led the KIA Tigers to the KBO championship in 2009, described the team’s victory as “emerging from a long dark tunnel.”

“I received more congratulatory text messages than when I won the Korean Series,” Cho said Sunday before the series finale against the Heroes. “I hope the first victory eases some of the pressure on players.”

On Sunday, Andy Marte appeared relaxed as he had a two-run homer and four RBIs.

Still, there is long way left for the Wiz to go as the team remains mired at the bottom of the league standings. Cho said it will take a while for his young players to develop and gain confidence.

“The need time to adjust because practice is different from real games,” he said. “They should become more familiar with opponents the more experience they get.”

Said Shin, the Wiz captain: “We don’t know how many times we’ll win, but baseball is a sport that delivers more fun because you never know what’s going to happen.”