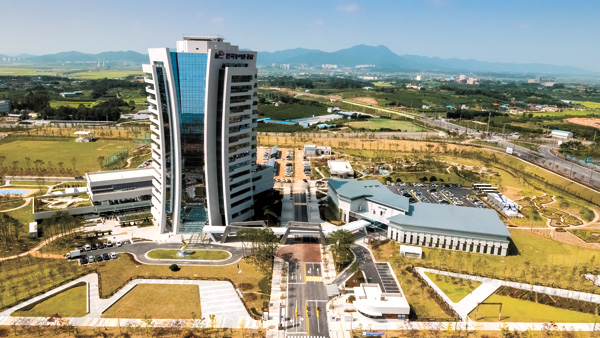 An aerial view of the Korea Rural Community Corporation’s head office in Naju, South Jeolla. Provided by the company

As the 7th World Water Forum opens, participating countries and organizations are gathering in Daegu and Gyeongbuk to address the importance of water and sustainable development, the main agenda of this year’s event.

The Korea Rural Community Corporation (KRC), in particular, is a major representative of Korea in the international meeting.

For over a century, the public corporation has overseen the wellbeing of rural and fishing regions in Korea, especially prioritizing the maintenance of clean and abundant water sources for agricultural use. The company fully recognizes that careful management of this vital resource is key to keeping the entire population safe and healthy.

The company understands that there are existing problems related to protecting our water supply, and is taking measures to tackle the issues as they emerge. For instance, global climate change has led to noticeable changes in how the company approaches water management. 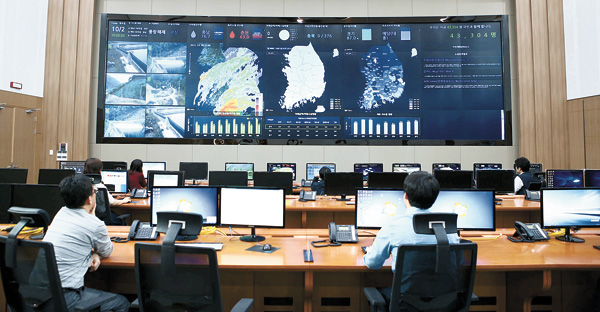 Last year, northern regions of Gyeonggi and Gangwon got only half the average amount of annual rainfall. A similar situation unfolded in Ganghwa County in Incheon, where rainfall was approximately 45 percent of the annual average. The reservoirs in Ganghwa suffered as a result, receiving less than half the naturally collected water typically collected in a given year.

But sufficient water was still needed for farming, so the company had to secure additional sources to compensate for the low rainfall. Irrigation and drainage canals were blocked to prevent water loss, and new waterways were created by excavating rivers and pumping from wells. The company prevented damages from the drought, filling up the reservoirs and securing extra water.

However, lack of resources is not the only problem for water management. There are critical problems in the process of overseeing water use, as well as controlling related infrastructure and facilities.

The company has to be particularly attentive to reservoirs, which are numerous and scattered across the country. This makes it difficult for careful evaluations to take place simultaneously. Irrigation and drainage canals are also inconvenient to evaluate on site because of their locations in mountainous regions. Sometimes, there aren’t even roads leading up to the facilities.

In response, the company is investing in technology that will make it possible for water to be accurately managed from even remote locations. Essentially, there are two core “smart” functions being developed. Telemetering will allow the observation of water levels, while telecontrol will actually make it possible to adjust the settings in facilities from afar.

The corporation is also investing in rapid data collection and analysis, and in the close monitoring of water management facilities. Their newly created all-source situation room allows real-time water monitoring, so that rice planting and other agricultural practices requiring ample water can be carried out easily. The monitoring also ensures that adequate water is supplied around-the-clock.

These efforts produce systematic analysis, and the data accrued can help keep better track of water use. Another benefit is that through enhanced control abilities, immediate action can be taken when potential natural disasters threaten the water-supply infrastructure and surrounding environment. This is crucial, considering that these kinds of unexpected and devastating disasters are increasingly frequent due to climate change.

Company officials stress that the forum will act as a platform where the importance of agricultural water can be discussed in depth. By actively participating in that discussion, the company wishes to stand as a role model for other nations and organizations that recognize the importance of, as well as invest in, water management technologies.

“Taking water management to the next level is essential, especially because the nation’s food security depends on it,” says the corporation’s president, Lee Sang-Mu. “Furthermore, since climate change is such a pressing issue, preparing ourselves for changing circumstances and being able to take action when necessary is a must in order to supply agricultural products with stability.”