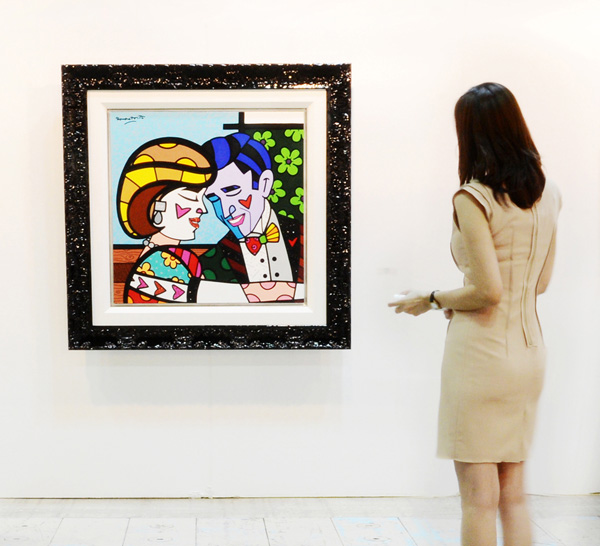 This 2013 photo shows a painting by artist Romero Britto on display at the Korea International Art Fair at COEX in southern Seoul. The artist recently sued Apple, accusing the company of misusing his color-splashed images. [JoongAng Ilbo]

MIAMI - Artist Romero Britto is suing Apple and a design firm in federal court, accusing them of misusing his color-splashed images and distinctive style in marketing campaigns.

The lawsuit seeks unspecified damages from Cupertino, California-based Apple and the design duo Craig Redman of New York and Karl Maier of London, whose company is called Craig & Karl.

Apple’s "Start Something New’’ marketing campaign was cited in the lawsuit as one recent example of misuse of Britto art. One image, an outstretched hand with colorful designs flowing from a fingertip, was licensed from Craig & Karl by Apple.

Officials at Apple declined to comment Monday. Craig & Karl did not immediately respond Monday to an email seeking comment.

Britto, whose Miami Beach studio and gallery is about a block from an Apple store, has licensing deals for his art with numerous corporations and other entities ranging from Coca-Cola to Mattel and FIFA.

After investigating the source of the Apple image, according to the lawsuit, Britto’s lawyers noticed apparent similarities between Craig & Karl’s work and that of Britto. Even if an image is not an exact copy, Britto attorneys say in the lawsuit his use of bright colors and repeating patterns is so distinctive that imitations are instantly viewed as his own work.

“This specific combination of visual elements when taken in its entirety creates a distinctive overall visual impression that is uniquely Britto,’’ the lawsuit says.

In fact, when the Apple "Start Something New" campaign appeared, Britto received messages congratulating him, incorrectly, for what appeared to be a new business deal with Apple. Some of his existing business partners expressed "consternation’’ about the supposed deal, according to the lawsuit.

Much of the lawsuit, however, focuses on numerous images created by Craig & Karl for other clients.

“Redman and Maier have systematically been using Romero Britto artwork to obtain jobs and advance their own careers by illegally trading upon the consumer affection and immeasurable goodwill built by Mr. Britto’s decades of tireless work, promotion and investment,’’ the lawsuit says. AP