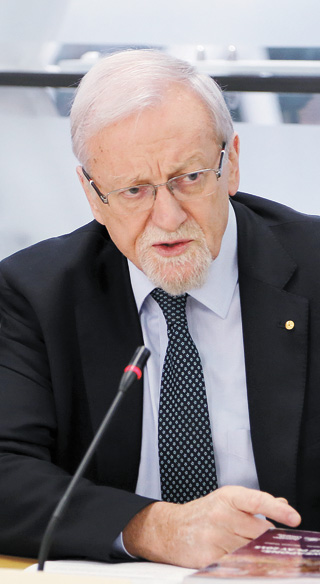 In the past five years, there has been significant backsliding and paralysis on the issue of nuclear disarmament and non-proliferation, according to Gareth Evans, the chancellor of Australian National University, who expressed a lack of optimism in the situation at a seminar in central Seoul.

Evans, a former Australian foreign minister, and Ramesh Thakur, the director of the Nuclear Nonproliferation and Disarmament at the Australian National University, unveiled a report Tuesday that the two had co-authored, entitled “Nuclear Weapons: The State of Play 2015,” at an Asan Institute for Policy Studies roundtable.

The 300-page paper assessed the challenges faced by arms control policy-makers ahead of the 2015 Review Conference of the Parties to the Treaty on the Non-Proliferation of Nuclear Weapons (NPT) in May at the United Nations headquarters in New York.

In 2014, there was an estimated 16,372 nuclear warheads distributed among nine nuclear-armed countries: the United States, Russia, China, France, the United Kingdom, India, Israel, Pakistan and North Korea, the report said. This is still down from around 18,000 in 2012.

Total nuclear arsenal has decreased considerably from the Cold War era: The total number of deployed and reserved warheads in 1986 stood at 64,449, with 40,159 belonging to Russia.

“When you look at it in historical terms, you can see dramatic reductions there have been since the height of the Cold War to just 10,000 deployed or reserved weapons. But when you look at the numbers in more detail, 10,000 becomes 16,000 because that adds weapons to be dismantled,” Evans said.

Of the world’s nuclear arsenal, 90 percent is in Russia and the United States. Russia has 8,000 warheads total, while the United States has 7,300. China came in fourth with 250, and North Korea ranked last with just seven warheads.

However, there is still concern surrounding the growth in nuclear weapons stockpiles in countries like China, India, Pakistan and North Korea.

“There’s absolutely no transparency at all” regarding North Korea and its nuclear weapons,” Evans said.

Pyongyang withdrew from the NPT in January 2003, and the report underscored that North Korea must be brought back to the non-proliferation treaty or involved in an equivalent agreement.

“North Korea must realize that its nuclear weapons program has detracted from, rather than enhanced, its international standing and national security; and that isolation and eventual economic collapse pose a far more real threat to the regime than external attack,” the report continued.

North Korea, described as “the world’s only NPT breakout state,” is estimated to have enough fissile material for up to eight rudimentary weapons, it added, assuming each uses up 5 kilograms (11 pounds) of weapons-grade plutonium.

The report, however, questioned whether Pyongyang has mastered the technology to miniaturize warheads “robust enough to withstand the rigors of a ballistic missile flight trajectory, such as high gravity forces, vibrations and temperature extremes.”

The stand-off between Russia and Western countries over the Ukrainian crisis last year makes early progress in the nuclear arms control agenda even less likely, said the report.

Evans said there is no progress in compliance and enforcement of non-proliferation.

“The tensions in Europe and the assertiveness of Chinese foreign policy, plus the continued anxiety here in particular about North Korea, has prompted a retreat to the old security blanket, that under these circumstances, we must need all deterrence mechanisms we can have,” said Evans. “What you’re getting - and this is accentuated by [Russian President] Vladimir Putin … talking about the development of new weapons that will create waves in the West - is this comfortable reassertion of the absolute centrality of nuclear weapons in strategic thinking.”

“The prospect of the actual deliberate use of nuclear weapons for traditional territorial expansion or assertive war righting is very unlikely to happen,” he said. “The real risk association is the accidental issues, which can arise particularly with imperfect command and control systems.”