The government has been ramping up its support for the export industry as outbound shipments this year have been struggling with depreciation of foreign currencies and sluggish global demand.

“Due to declining crude prices, both imports and exports have been falling the past three months,” Minister of Trade, Industry and Energy Yoon Sang-jick said at a meeting with businesspeople, including high-ranking export and e-commerce executives on Wednesday. “Major companies, particularly smartphone and automotive manufacturers, who have been expanding production lines overseas, have to help overcome the struggling exports by increasing the production at our local factories.”

However, executives from the leading exporters Samsung Electronics and Hyundai Motor did not attend the meeting at the headquarters of the Korea Federation of SMEs.

Yoon emphasized the need for stronger support for smaller businesses. 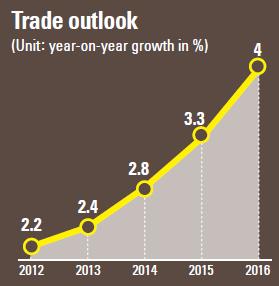 “As much as it is a problem that the sales of [Korean] smartphones and automobiles manufactured at the overseas production plants do not contribute to the nation’s exports, the bigger problem is that the number of small and midsize Korean exporters that are struggling has been increasing,” the minister said. “It is the role of the government to help small and midsize companies, including the smaller business partners of conglomerates, to secure competitiveness.”

The minister’s comments came on the day the Ministry of Trade, Industry and Energy announced plans to supporting the expansion of Korea’s exports. 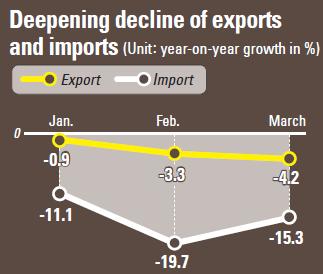 The government laid out four major strategies: expand entry and distribution of Korean goods in the Chinese market; strategic targeting markets with huge potential, including the United States, whose economies have been on a solid recovery tracks, as well as Australia and Canada, whose free trade agreements with Korea recently went into effect; step up support of small and midsize companies, especially on entering overseas markets; and expand trade insurance.

Since the beginning of the year, the Korea International Trade Association and Alibaba.com have run a joint education program to create 100 Korean specialty retailers in China.

The government also is working with JD.com, the second-largest Chinese e-commerce company, to increase sales of Korean goods.

Last year Korea’s exports grew 2.3 percent year-on-year to $572.7 billion. But since January, year-on-year export growth has been declining rapidly. The 0.9 percent decline in January grew to a drop of 4.2 percent in March.

Furthermore, the report was released a day after the World Trade Organization lowered its forecast for 2015. The organization on Tuesday slashed its global commerce outlook to 3.3 percent from the 4 percent it projected in September.

“Trade growth has been disappointing in recent years, due largely to prolonged sluggish growth in GDP following the financial crisis,” said WTO Director-General Roberto Azevedo. “Looking ahead, we expect trade to continue its slow recovery, but with economic growth still fragile and continued geopolitical tensions, this trend could easily be undermined.”

The WTO noted that in 2014, the global trade market grew 2.8 percent, below its earlier forecast of 3.1 percent. It noted that the “modest gain” last year marked the third consecutive year in which trade grew less than 3 percent. It also said the average growth from 2012-4 was 2.4 percent, the lowest ever for a three-year period.

“Collapsing world oil prices in 2014 (down 47 percent between July 15 and Dec. 31) and weakness in other commodity classes hit export receipts and reduced import demand in exporting countries, but also boosted real incomes and imports in importing countries,” the WTO noted. “Prices have continued to fall since then, suggesting excess supply, insufficient demand or both. Whether this turns out to be a positive or a negative development on balance for world trade in 2015 remains to be seen.”