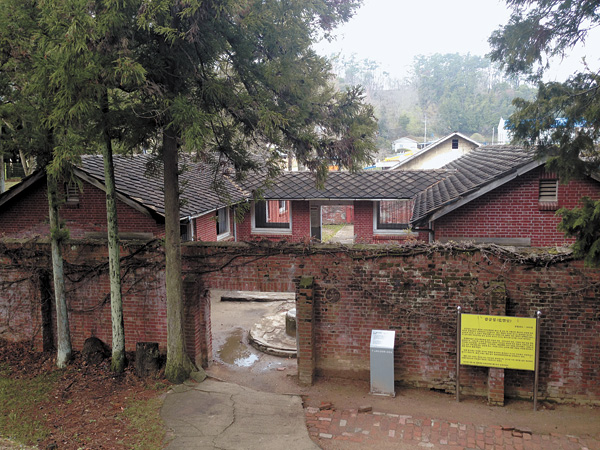 A view of the H-shaped Japanese-style building, which was used as a detention center for leprosy patients during the Japanese Colonial Rule (1910-45) on Sorok Island. It is now the Sorokdo National Hospital, where leprosy sufferers are still treated. By Lee Sun-min

GOHEUNG, South Jeolla - An unusual record of Korea’s modern history exists on Sorok Island, which has been a communal habitat for leprosy patients in Korea for close to 100 years.

People who contracted the now-curable disease that can leave debilitating skin lesions on bodies were shunned by locals and forcibly moved to the island during Japanese colonial rule (1910-1945).

Unfortunately however, being exiled to the island for the condition was not solely for the benefit of the patients. Since a cure and information about leprosy were not readily available at the time, the Japanese authorities performed medical experiments on the island’s patients, as well as illegal autopsies, according to Kang Chun-ae, who guided the Korea JoongAng Daily around the area.

Two red-brick buildings remain intact in remembrance of the people who were mistreated inside.

The Japanese-style constructions have since been designated as cultural heritage sites.

Left:The building has a room housing a small toilet where patients were tortured when they did not follow orders from the Japanese authorities. By Lee Sun-min Right: After patients died, doctors performed autopsies on the white table to discover more about the disease. By Lee Sun-min

Right next to those is a museum that chronicles how the lives of the residents have changed. It displays items ergonomically designed to help patients with leprosy live their lives.

The island continues to treat sufferers of the disease. The entire locale is now Sorok National Hospital, which opened in 1916. The Ministry of Health and Welfare now takes charge of providing medical services to the residents.

Although the island isn’t exactly a travel destination as much as it is a historical and medical site, the ministry has kept a part of it open to correct the misunderstandings of leprosy that still prevail.

The local district office says that more visitors have been going to the island recently as next year will mark the 100th anniversary of the hospital’s establishment, although there is no official data on this considering it is a medical zone.

Visitors are only allowed to enter designated areas in order to protect the privacy of the patients between 9 a.m. to 5 p.m. daily.

When traveling to the island, it is strongly recommended that visitors request a guide in order to receive more details about the events that happened on the island and how the lives of the patients have changed in the past years.

Left: A photo of patients with leprosy meeting their families once a month. To prevent the virus from being transferred they were kept separate from one another. Right: A wall painted with images of the leprosy patients on Sorok Island behind Sorok National Hospital.

The county office provides the service for free when a group of 20 or more requests a guide.

The service is provided in Korean only. A tour of the island takes about an hour.

In early 1900, when Japan colonized Korea, it made the decision to isolate the country’s leprosy patients on one island.

By 1933, Japan had complete ownership of the island and a plan to hospitalize every leprosy patient in Korea.

Based on its new precautionary decree implemented in 1935, the Japanese authorities forcefully relocated homeless leprosy sufferers to the island, pushing the area’s original inhabitants out.

The Japanese officials did not obtain diagnoses from doctors to justify moving the patients in against their will. 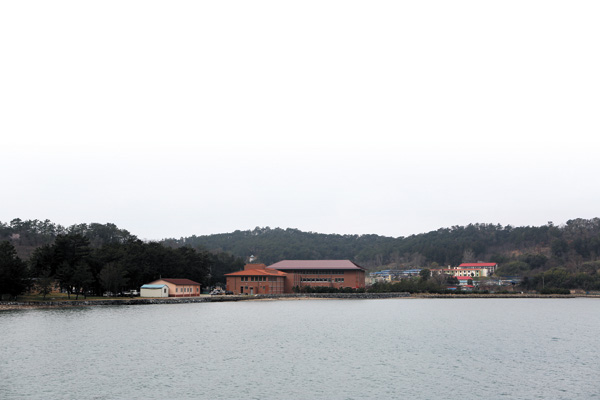 A view of the restricted part of Sorok Island as seen from a trail that is open to the public.

Rules were put into place to ensure strict order was kept. Many patients who rebelled against the island’s authorities were supplied with less food or were detained for up to 30 days within a small room, with alleged cases of patients being imprisoned for even longer.

Patients had no option but to endure punishments. It was impossible to run away from the island as escapees would have had to swim across the ocean. Even nearby fishermen did not give a helping hand as the disease was stigmatized and widely known for being contagious.

Out of fears that the illness was hereditary, doctors forcibly gave vasectomies on some male patients. Many who married within the island were prohibited from having children and abortions were performed by the authorities when those trying to hide their pregnancies were found out.

Death brought little peace to these patients. When sufferers died, doctors would perform autopsies on them without obtaining their permission while they were alive, according to the guide Kang.

To completely remove traces of the illegal autopsies, Japanese set up a crematorium - the first of its kind in Korea. As a result, there is a saying that leprosy patients died three times in their lives: first when they learned they had the disease, second when they received an autopsy and third when they were cremated. 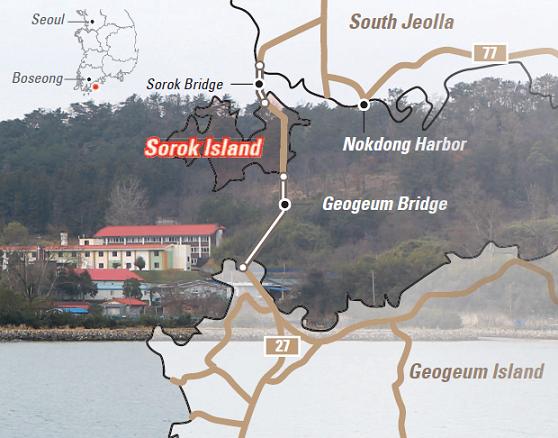 Patients dreamed of dying on a Sunday so that they could have their complete remains buried as this was when the doctors were off duty.

The evidence of Japan’s coercive actions remain on the island. The detention center has been preserved and visitors can walk around it to see how the patients’ basic human rights were violated.

In an old medical lab next to the detention center, a bed with wooden shackles to keep resisting patients stable when vasectomies were performed on them still remains. The adjoining room has a white plastic table where doctors performed autopsies, next to the now-empty cabinets once filled with medicine.

It has become easier to get to the island since the Sorok Bridge was constructed in 2009. Until then, the island could only be reached by boat.

The island has many fences. Visitors arriving by car must park in the designated area and are only allowed to walk along trails set up to Sorokdo National Hospital.

When visitors vacate the parking lot the first thing they will see is a space called sutanjang, which means a place of sadness.

This is where patients met their families once every month. As the disease was believed to be airborne at the time, sufferers and their relatives were kept segregated from each other during visits.

About a 10-minute walk along the South Sea, one can view the many buildings and greenery of the restricted area. When you get to Sorokdo National Hospital, you will see a detention center and a medical room where illegal surgeries were performed.

The island now has about 580 residents. About 100 with serious conditions are hospitalized and the rest live in seven different villages on the island that is twice as big as Yeouido, western Seoul.

As no new leprosy patients have been spotted in the past decade and as the disease is now curable, the average age of the inhabitants is high, at 76. The patients are given food, clothing, housing and other necessities from the government.

The families of the patients can visit any time. Patients with less-serious conditions usually live near the area that visitors are allowed to access.

Residents in more serious conditions live on the other side of the island. Visitors can peep into this restricted area. The landscape appears just like a countryside village with houses, buildings, trails and parks.

There is a large empty space where all the patients gather every year. On May 17, the patients and their families come for a sporting event.

As many volunteer workers joined in with the fun, relatives who were afraid to let others in society know they have a leprosy patient in the family usually came as well.

Back in the days when the disease was highly stigmatized, many relatives of leprosy sufferers only got to see their loved ones on that particular day, as they needed to present their ID for a visit.

As people did not want a record of the fact that a family member had contracted the disease, they gave up on spending time with their parents or brothers and sisters.

Behind the open space is a school building that no longer functions as an educational center as there are no young residents on the island anymore.

Alongside the buildings with a depressing history, visitors will also see Jungang Garden, the most beautiful part of the island.

This Japanese-style area has a variety of tree types, alongside a type of red camellia.

It is considered good luck if you spot a deer in the garden. There are about 350 on the island.

Connecting to the rest of the world

If making a day trip to the island is too short, you could consider volunteering there. The hospital now takes on people who want to help take care of patients.

You can either choose to volunteer at the seven different villages where residents live in their own or shared houses, or at the hospital.

Head to the hospital’s website, www.sorokdo.go.kr, for more information about the volunteer program.

When the island was connected to the mainland through Sorok Bridge it also made it possible for Geogeum Island more easily accessible.

Afterwards, Geogeum Bridge was constructed and opened in 2011.

Geogeum Island, south of Sorok Island can be reached by car.

Many visitors can first take a look around Sorok island, then move to the much bigger Geogeum Island to take in the scenery.

As the road surrounds the coastline, it leaves plenty of time to take multiple photos of the breathtaking views over a 30 minute drive around the island.

On the way into Geogeum Island from Sorok Island, there are a couple of food trucks that sell a sweetened pancaked called hotteok.

Different from other hotteok found inland, however, this treat is made with maesaengi, a type of green seaweed. During the spring, the owners also put in some fresh vegetable called ssuk to make the snacking experience even more unique.

If just a taste of maesaengi doesn’t satiate your appetite for the seaweed, there are many restaurants that prepare a soup using it.