An 18th-century Japanese folding screen featuring peonies was a gift from the Japanese ruler to the Joseon court, delivered through Joseon Tongsinsa. Provided by the National Palace Museum of Korea

Trust is hard to find in today’s Seoul-Tokyo relations.

However, for the Joseon Tongsinsa - the goodwill envoys Korea sent to Japan for about 200 years between the 17th and 19th centuries - trust was the basis of their journey.

After all, Tongsinsa literally means “envoys to exchange trust.”

They were comprised of 400 to 500 people. The journey took them to Tsushima, Shimonoseki, Osaka and finally Tokyo. As they traveled via sea and over land, one journey took between 10 to 12 months.

Their goal was to promote Korean culture in Japan and build bilateral trust, which is why some advocates refer to the trips as the origins of Hallyu, or the popularity of Korean pop culture abroad. 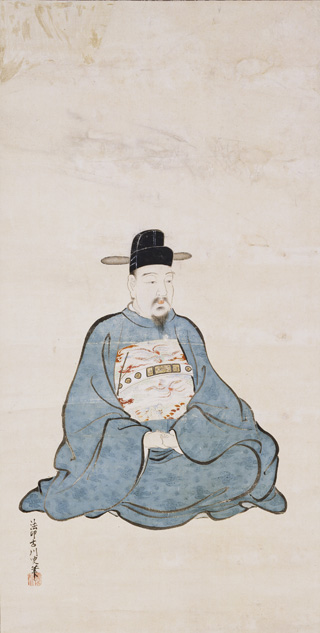 And they were well received.

Sin Yu-han, who went on one of the journeys in 1719, also wrote in his travel diary that “it was such a pain because there was no time for us to rest.”

“The literati visited us in our lodgings one after another,” he said. “They recited poems and we answered with reciprocating poems.”

Against this backdrop, the National Palace Museum of Korea is holding an exhibition on the paintings that these envoys exchanged with Japanese diplomats and scholars during their trips.

Titled “Korean Envoys as Seen Through Paintings” the exhibition is rather small in scale, showcasing just four paintings, but it is meaningful considering that cultural activities celebrating Seoul-Tokyo relations are so rare nowadays, despite this year being the 50th anniversary of the normalization of bilateral ties.

An 1811 painting by Sin Yun-bok (1758-unknown). It was taken to Japan by the missions on its last journey there. Provided by the National Museum of Korea

Relations between Korea and Japan are arguably at their lowest amid history and territorial disputes and President Park Geun-hye’s position that Japan should first apologize for forcing some Korean women to work in front-line brothels during World War II before agreeing to a summit with Prime Minister Shinzo Abe.

Besides the diplomats, their assistants and secretaries, other people in various fields - such as court painters, musicians and translators - were part of the envoys, said No Myeong-gu of the National Palace Museum.

The Japanese people welcomed the visitors with enthusiasm and lined up wherever the Korean diplomatic entourage stayed to receive Korean texts, calligraphy pieces and artworks, No said.

Museum officials say that court painters recorded their stay in Japan through paintings and left them behind.

They also brought Japanese paintings to Korea, as the rulers of the island nation gave several of these pieces of art as gifts to Joseon kings.

There is also a painting from 1811 of a Chinese myth by Sin Yun-bok (1758-unknown), one of the most famous court artists in the late Joseon Dynasty.

Historians believe the painting was taken to Japan by Joseon Tongsinsa on the group’s last journey to the country, which took place that year. An individual collector in Korea bought it recently, bringing the piece home after it had spent more than 200 years from Japan.

Also of interest is an 18th-century Japanese folding screen featuring peonies. The background glitters as it’s made with gold powder mixed with traditional glue. It was a gift from the Japanese ruler at the time to the Joseon court.

Since 2002 there have been joint efforts by Korea and Japan - on a regional level - to register records related to Joseon Tongsinsa on Unesco’s Memory of the World list, given the importance of the envoys in the history of Korea-Japan ties.

Busan and Tsushima, the departure and arrival cities for the diplomats, re-enact the parade every year, although they skipped 2013 amid disputes over the Buddhist statues of Korean origin that Korean thieves stole from temples in Tsushima.

However, the central governments of the two countries have not been involved in the attempts to register records related to Joseon Tongsinsa on the Unesco list.

What’s worse, such moves have lost support as relations between Korea and Japan have been lower in recent months amid disputes over history and territory issues and because both the Park Geun-hye and the Shinze Abe administrations are taking an obstinate approach.

Still, the Joseon Tongsinsa promotional committee, made up of politicians from Seoul and Tokyo, announced in December that they plan to hold academic conferences this year and aim to register the records on the Unesco list in 2016.

“The records offer valuable insights into how Japan, an island country, accepted the cultures of the mainland through Joseon,” Jeong Woo-taek, a representative of the ruling Saenuri Party, told journalists through a press release.

“By registering the records on the Unesco list, we hope to find a breakthrough in the soured Korea-Japan relations,” he said. Jeong is a member of the committee.

Unesco’s Memory of the World Register seeks to preserve cultural heritage documents from around the world.

Korean artifacts added to the list include “Jikji Simche Yojeol,” the world’s oldest movable metal-type printings of Zen Buddhism essentials; the Uigwe books on royal protocols; “Donguibogam,” an encyclopedia on Eastern medical principles and practices, and the printing woodblocks of the Tripitaka Koreana.