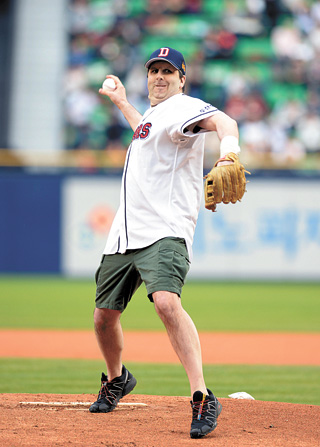 Mark Lippert, U.S. ambassador to Korea and an avid baseball fan, threw the ceremonial first pitch at Jamsil Baseball Stadium on Saturday for the game between the Doosan Bears and Lotte Giants.

Despite being hospitalized after being attacked by a knife-wielding man last month, Lippert stayed for the entire game with his wife Robyn and son James William Sejun. The Bears’ American pitcher Dustin Nippert was a one-time instructor for his ceremonial pitch.

Lippert watched the game from a table with KBO commissioner Koo Bon-neung. Chimaek (fried chicken and beer) was on the table.

The Bears delivered an exciting match for the ambassador. The home team won 7-5, thanks to walk-off three-run home run from Choi Joo-hwan.