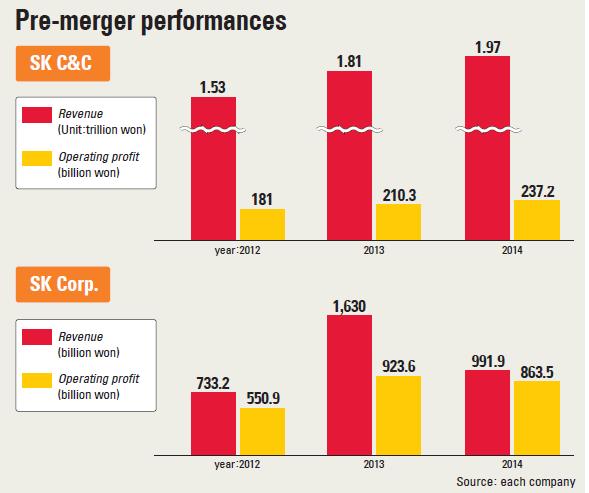 SK, the nation’s third-largest conglomerate, announced Monday it would merge two subsidiaries that are considered key pillars of its business - SK Holdings, its holding company, and SK C&C, an IT service unit - into a bigger holding company, according to a regulatory filing.

The merger, scheduled to be completed by Aug. 1, will form a holding company with combined assets of 13.2 trillion won ($12.2 billion).

The two companies held separate board meetings Monday and agreed on the plan that SK C&C will acquire SK Holdings in an all-stock deal. Each common share in SK C&C will be swapped for 0.74 shares in SK Holdings and the name of the merged unit will be SK Holdings.

“We intend to simplify the management structure through the merger and to lay the foundation for two companies to come up with new growth drivers,” said SK in a statement.

The conglomerate officially designated SK Holdings as its holding company in 2007, but consistent concerns have been raised over the unstable structure of SK C&C governing SK.

Despite SK Holdings being the holding company in a nominal sense, SK C&C has been effectively controlling the group because it owns a 31.8 percent stake in SK Holdings, the largest stake.

SK Chairman Chey Tae-won was sentenced to four years in prison in 2013 for embezzlement and is still behind bars. Since he holds a 32.9 percent stake in SK C&C, he is set to become the biggest shareholder of the new holding company.

Shares in SK C&C have nearly doubled in the past year largely due to intra-group transactions on the back of robust demand from IT-related affiliates such as SK Telecom and SK Planet. As of 2013, intra-group deals accounted for 41.5 percent of total revenues.

The corporate governing structure will become simpler. At the same time, the new structure will let the chairman step up his relatively weak dominance over SK compared to other corporate owners of chaebol.

SK’s move prompted speculation that other conglomerates with complex shareholding structures such as Samsung and Hyundai may follow in its footsteps.

All three are run by the second generation of their families and Samsung has already seen bedridden Chairman Lee Kun-hee’s only son Jay Y. Lee assuming the commander in chief role.

Billionaire chaebol owner Chey will qualify for parole in July as he will have completed two-thirds of his prison term.