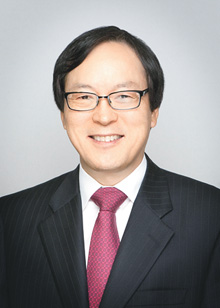 Nominee Kim Yong-hwan was approved as chairman of Nonghyup Financial Group by the Government Public Ethics Committee on Friday despite earlier concerns that the recent Sung Wan-jong graft scandal might hinder his inauguration.

Because it’s been just a year since Kim retired from his position as president of the state-run Export-Import Bank of Korea (Exim Bank), the public ethics law required his qualifications to be examined before the start of a new job.

The committee decided that Kim’s previous experience as CEO of Exim Bank does not mean he would abuse his ties with the government to gain privileges for Nonghyup and its agricultural finance business.

Nonghyup is the country’s second-largest financial institution with 315.7 trillion won ($293 billion) in consolidated assets and 649.9 billion won in net profit as of last year. It specializes in agricultural finance as it has the largest number of bank branches that are accessible to people in rural areas.

Kim is expected to be officially inaugurated as chairman of Nonghyup on Monday after the group’s board and shareholders’ meetings.

Before the committee met, the prospects of Kim passing the examination were not so positive, as he was one of the financial figures whose names were written in the diary of the late Sung Wan-jong, a construction tycoon and former lawmaker who committed suicide on April 9, leaving behind a list of key members of the Park Geun-hye government who received illegal funds from him.

Including Kim, the late Sung left records of his meetings with financial bigwigs such as Choi Soo-hyun, former governor of the Financial Supervisory Service (FSS); Shin Je-yoon, former chairman of the FSC; and incumbent FSC chief Yim several months ahead of his company’s application for a third debt workout program in 2013.

The diary said Kim and Sung met on Sept. 13.

According to the JoongAng Ilbo, Kim acknowledged that he had met up with Sung when he was a lawmaker who belonged to the National Policy Committee in charge of financial policies and institutions. But Kim denied discussing any financial issues related with Sung’s company, Keangnam Enterprises.

It was discovered, however, that Exim Bank had issued about 500 billion won worth of bonds to Keangnam in total as of 2013, the largest amount any financial institution had lent to the company. Suspicions are rising that Kim, who was leading Exim Bank at the time, could have been lobbied by Sung. Complaints have come up within the financial sector that helping the company when other worthier companies were struggling was unfair. The third workout reportedly proceeded in a hasty manner, skipping major procedures such as capital reduction.

It was confirmed on Thursday by the Board of Audit and Inspection of Korea that the FSS had put pressure on main creditor Shinhan Bank to help Keangnam by giving the company privileges in 2013.