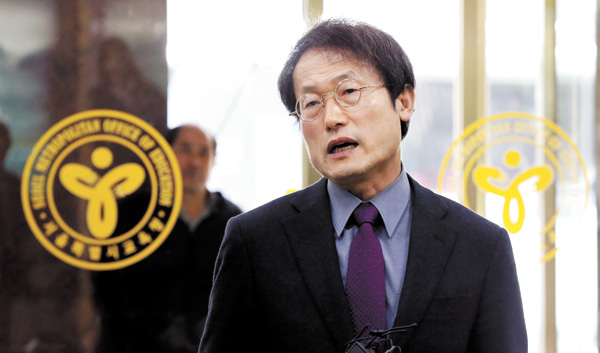 The post of Seoul education superintendent, one of the most powerful educational positions in the country, might be vacated for the third time since direct elections were introduced for the post in 2008.

On Thursday night, the Seoul Central District Court sentenced Seoul Superintendent Cho Hee-yeon to pay a 5 million won ($4,640) fine for spreading false information about one of his rivals, Koh Seung-duk, during the election campaign last year. If the ruling is upheld in the Supreme Court, he will be kicked out of his job.

Cho claimed that Koh was a permanent resident of the United States, which wasn’t true.

“Superintendent Cho did not fully check the facts about Koh’s permanent residency in the United States when he held a press conference about it,” said the judge panel. “Given that Cho mentioned the issue again even after Koh released an explanation, Cho’s action was clearly the spreading of false information.”

Under local educational law, a candidate who intentionally disseminates false information about a rival can be fined 5 million to 30 million won or sent to prison for up to seven years. An education superintendent who is fined 1 million won or more or sentenced to any time in jail loses his job.

Cho was indicted in December. He is appealing and a final Supreme Court verdict could come in six months.

The ruling Thursday is expected to affect the capital city’s educational policies promoted by the 58-year-old left-leaning superintendent, including cancelling the designation of autonomous private high schools and increasing the number of so-called innovative schools, though Cho insisted that the policies will continue.

“Innovative policies for Seoul’s education will stay firm and steady despite my conviction,” said Cho after the ruling at the court. “I will do my best to keep promoting various policies because my conviction isn’t finalized yet.”

Cho, who won an election last June, has tried to strip some schools of the status of self-governing private high schools, which are considered to cater to the rich and elite, even though he faced intense opposition from the Ministry of Education and the schools themselves.

During the campaign, Cho learned from a social network service posting by a reporter that Koh had permanent residency in the United States. He held a press conference on May 25, about a week before the June 4 local elections, at the National Assembly and raised the issue concerning Koh, who was the front-runner in polls. Cho said a person with permanent residency in a foreign country should not be allowed to serve as a superintendent.

The next day, Koh denied the allegation and said he never acquired U.S. permanent residency. But Cho raised the issue twice more by releasing a statement on May 26 and mentioning it in a radio interview on May 27, the prosecution said.

Cho won the election with 39.1 percent of the vote. Koh came in third, winning only 24.3 percent. Aside from the green card allegation, Koh was hurt by a letter written by his daughter questioning her father’s qualifications to become superintendent. She claimed Koh neglected his family.

Seoul’s election committee closed the case after giving warnings to both candidates on June 3, a day before the election, but right-leaning educational organizations filed a complaint and the prosecution indicted Cho on Dec. 3, only a day before the expiration of the statute of limitations.

Cho requested a jury trial in the first preparatory proceeding in January, claiming that the prosecution intentionally targeted him by reopening the case, and the request was admitted in February. The trial went for four days and all six jury members found him guilty.

The ruling Thursday prompted criticism of the direct election system that was introduced in 2008. Critics say education policies need to be pursued over a long period of time, while elections have led to a revolving door.

Two of Cho’s predecessors could not finish their terms. Kong Jeong-taek, who was elected in June 2008, had to leave the post a year later after he was fined 1.5 million won in 2009 for not reporting 400 million won of assets under his wife’s name.

Kwak No-hyun also stepped down after he was convicted of paying a campaign challenger 200 million won to drop out of the race. Kwak was put behind bars for a year.

The Korea Federation of Teachers’ Associations, the largest right-wing educational group, already filed a constitutional lawsuit in August against direct elections for the post.

If Cho is forced out by the Supreme Court’s verdict, a new superintendent will be elected in local elections scheduled for April 13, 2016.