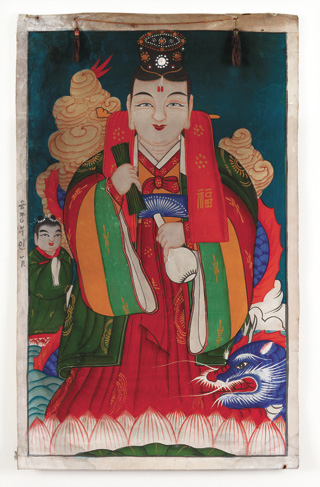 The mid-20th-century shamanistic painting portraying Lady Jeongjeon is among the collection of renowned folklorist Kim Tae-gon (1936-96). Provided by the museum

Like Confucianism, shamanism was more than just a religion to Koreans.

It was part of culture and tradition, influencing and inspiring many in the country throughout its history.

A rare exhibition displaying about 300 artifacts related to Korean shamanism is underway at the National Folk Museum of Korea, located on the eastern side of the grounds of Gyeongbok Palace in downtown Seoul.

The exhibit is unique in that it unfolds through the perspective of one man who dedicated his life to studying and archiving the culture and history of Korean shamanism.

The Myeongdu mirrors that Korean shamans believed would protect them from evil spirits.

Kim Tae-gon (1936-96), an expert in Korean folklore and literature, spent his life observing the works and lives of Korean shamans, keeping notes and collecting relics. Kim - a professor at Wonkwang University and Kyung Hee University - was known for his meticulousness and habit of recording every single detail in his journals.

There are several influential folklorists in Korea, but museum director Cheon Jingi said it’s notable that Kim was one of the few who both studied shamanism and collected artifacts.

Kim has followed shamans since he was in college, collecting the paintings and other items that they usually burned or buried underground when they stopped practicing the religion, museum officials say. He wrote 34 books on Korean shamanism and left 200 articles and other texts.

After Kim’s untimely death at the age of 61 in 1996, his wife tried to preserve the relics and texts he left behind at their home, even installing a special climate-control unit to protect his possessions. But eventually, in 2012, his family donated his collection on shamanism - comprising of about 30,000 photographs and video clips and 1,500 artifacts - to the National Folk Museum of Korea.

“Most shamanistic rituals disappeared with the history in Korea’s modernization efforts,” curator Jang Jang-sik said, “but thanks to photographs and video clips Kim left, some of them could’ve been restored properly.”

One is the Namijanggun (General Nami) Sadangje, or the ritual to console the spirit of General Nami (1441-68), who was executed after being falsely accused of conspiring against the government.

“Korean Shamanism from a Vision of Folklorist Kim Taegon” runs until June 22 at the National Folk Museum of Korea in Gyeongbok Palace, central Seoul. The museum closes on Tuesdays. Admission is free. For more information, visit the museum’s website (www.nfm.go.kr) or call 02-3704-3114.