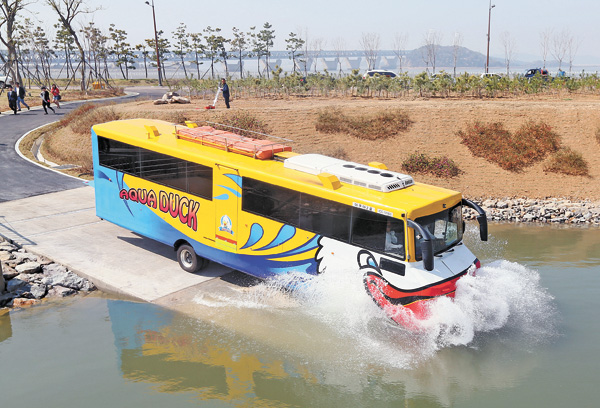 Earlier in the week, a vehicle that looked like a standard bus stopped in front of the dock near Gyeongin Ara Waterway Terminal in Incheon.

“Wear your life jackets; we’re going into the water,” the guide said.

A few moments later, the bus delved into the water with its engines - the type often equipped in ships - whirring and humming.

The vehicle, the country’s first amphibious bus aptly named the Aqua Bus, made its first showcase last week, running a route around the terminal and the waterway, which connects the Han River and the Yellow Sea. The official launch is set for next month.

Compared to a standard bus, the Aqua Bus is easily distinguishable. The vehicle’s operator, Aqua Tour Korea, said that because it must navigate through currents, its height is about 60 centimeters higher than a standard bus.

“We had to build it higher than other buses because 1.1 to 1.2 meters of the vehicle will be submerged after getting into water,” said Jang Ho-deok of Aqua Tour Korea. 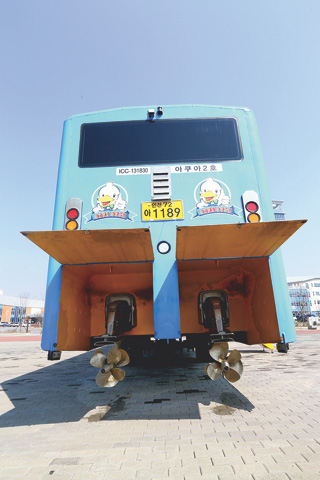 In water, the bus sails via two propellers equipped on the rear. Provided by Aqua Tour Korea

“In case water gets inside the bus, which is waterproof,” he added, “there are six water pumps in operation to release any excess.”

The amphibious vehicle comes equipped with three engines - one for land and two for water. Two propellers are set at the rear of the bus.

Because of its special design, two drivers are required to operate one bus ? one of whom serves as a sailor and steers the vehicle in the water. In addition, it can accommodate 39 people including the drivers and the guide.

Originally an 8-ton truck but under Aqua Tour Korea’s direction, it was built into an amphibious bus, passing safety tests for a vehicle and a ship.

Departing from the waterway terminal, the bus runs an approximately 10-kilometer (6.2-mile) route along the southern part of the waterway for over 50 minutes. After returning to the starting point, it gets into the water, where it sails for 15 minutes.

The entire land and sea tour takes around an hour to complete.

When asked about the risk of the vehicle capsizing due to harsh currents, Jang said that the vehicle had passed an incline test. However, the operator will drive the bus only on the waterway to alleviate safety concerns.

The vehicle contains a lifeboat that can accommodate 18 people.

While traversing the waters, the bus is relatively quiet and built to provide more comfort than regular ships. During the Incheon Asian Games last year, the operator offered foreign athletes the chance to ride as passengers, who reacted positively to the experience and the vessel’s ease in the water. 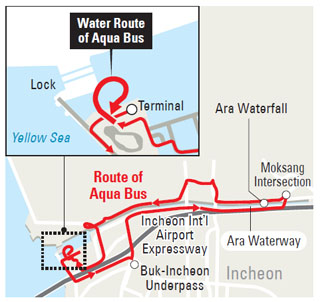 “Fares for amphibious bus service in the U.S. and Britain are pretty expensive [by comparison],” Jang said, adding that the bus will likely attract more tourists from China, where amphibious buses are unavailable.

Aqua Tour Korea already plans to run three amphibious buses on the waterway in the park in Songdo International Business District in Incheon.