Oil companies having a great 2015

Oil companies having a great 2015 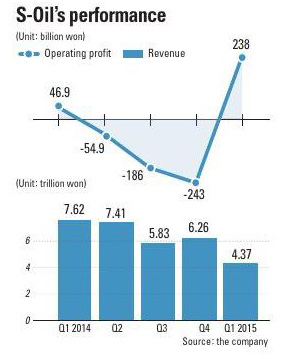 Recent low international oil prices have helped Korean oil companies in the first quarter overcome last year’s slump. But there are worries that the effect will be fleeting.

S-Oil, one of the nation’s big four oil refiners, announced Monday its highest operating-profit-to-sales ratio since 2012 and the other three are also expected to show good results, according to the industry.

S-Oil said its operating profit for the quarter was 238.1 billion won ($221.6 million), a 407.3 percent rise from a year earlier. The 5.4 percent operating-profit-to-sales ratio was the highest since the third quarter of 2012 when it was 6.1 percent.

In the fourth quarter of last year the company had a 243.9 billion won operating loss.

“Profitability in the oil refining business was improved due to the increased demand for oil products caused by low international oil prices,” said S-Oil in a statement.

Operating profit in oil refining was 119 billion won, the highest in six years and the first profit since the second quarter of 2013.

“As the demand for oil products increased, the benchmark Singapore complex gross refining margin in the first quarter increased to 6 dollars per barrel, the highest level in six years,” the company added. “That means that the profitability of the business has been improved greatly.” The margin for the first quarter of last year was only $2.9 per barrel.

“Due to the low oil prices, average demand for oil products in advanced countries increased by about two percent from a year ago,” said analyst Choi Ji-hwan of NH Investment & Securities. “It also boosted the sales of industrial products including bunker c-oil used for maritime transport.”

But the companies worry the rebound might be temporary - especially if oil prices rise.

The companies are trying to cut expenses to keep profits going. The nation’s No. 1 oil company, SK Innovation, has cut its budget for business operations including overseas business trips and education programs for employees by 20 percent from a year ago. Executives who were able to enjoy business class on business trips were ordered to take economy class. The salary for SK executives was cut by an average of 10 to 20 percent. The company has put a plot of land in Incheon, which is worth about 20 billion won, on sale.

GS Caltex is trying to sell about 100 gas stations directly run by the company. That could raise about 300 billion won. S-Oil recently replaced all the lights at its headquarters in Mapo District, western Seoul, with LEDs.