Hunt is on for missing diary of Sung Wan-jong

Hunt is on for missing diary of Sung Wan-jong 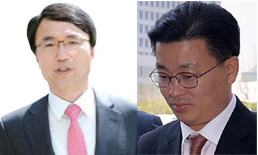 An aide to Sung Wan-jong, former chief of Keangnam Enterprises and central figure in an unfolding payoff scandal, ordered a secretary to get rid of Sung’s diary the day the company was raided March 18, prosecutors said.

The diary is believed to have Sung’s schedule from January to March.

During a pre-trial detention warrant review hearing Sunday for the aide, a Keangnam public relations official named Lee Yong-gi, a prosecutor asked Lee about the diary and other documents that were taken away by the secretary, and Lee denied the allegation. The Seoul Central District Court issued the warrant later on Sunday.

“We have retrieved some of the concealed data such as Sung’s diary, account books and transactional information,” said a prosecutor. “We confiscated the account book from one of the company’s finance officials, though we haven’t found the secret ledger that is believed to have been used for his bribery.”

Sung and Keangnam were being investigated for allegedly siphoning off government funds during the Lee Myung-bak administration’s resources diplomacy initiative. Sung considered himself a political scapegoat and, lashing back at the current government, claimed to have made payoffs to the inner circle of President Park Geun-hye and to many other politicians as well.

Shortly after making those claims, Sung was found hanging from a tree branch on Mount Bukhan on April 9. He left a note in his pocket with the names of eight politicians along with money amounts and dates.

Prime Minister Lee Wan-koo, whose resignation was accepted by the president Monday, was one of the eight names on the list, which also named former and incumbent presidential chiefs of staff.

The prosecution believes that Sung gave Lee the order to remove the diary and other papers and that Lee colluded with another former executive of the company named Park Jun-ho, who has also been detained by the prosecution for destroying crucial evidence.

The investigators suspect a phone call Lee made to the secretary at 6:35 a.m. on March 18 was intended to make her get rid of those documents before the raid began.

The prosecution has so far detained Sung’s two closest aides, Lee and Park, for allegedly concealing or destroying evidence. They continue to deny the existence of a secret ledger of politicians who received payments from Sung.

“[The company] has extensively concealed [documents] and we’ve discovered some of them,” said a prosecutor on Sunday. “But we haven’t found the secret ledger and we are planning to conclude the initial investigation on Sung’s aides and secretaries early this week.”

The prosecution also summoned another key aide to Sung, an official of Keangnam Enterprises named Jeong Nak-eon, on Monday for interrogation. He worked for Sung as a secretary when Sung served as a politician from 2012 to 2014 and also worked at the construction company. Given that he is in charge of general affairs, the prosecution believes he has managed some of the money used by Sung for payoffs, or delivered the bribes himself.

On Sunday, prosecutors also summoned Sung’s chauffeur and another secretary for questioning. Those two are known to have accompanied Sung on April 4, 2013, the day Sung claimed he gave 30 million won to Prime Minister Lee in an interview with a local newspaper a few hours before he died.

The prosecution believes former executive Park hauled away many documents from the company’s office and allegedly turned off security camera in the company’s parking lot so he wouldn’t be seen doing so. The secret ledger is thought to be one of them.

The prosecution is expected to begin summoning those who are on the list found in Sung’s pocket soon.

A summons is expected for South Gyeongsang Governor Hong Joon-pyo, who is also on the list found in Sung’s pocket with 100 million won written next to his name. Sung said in the interview with the newspaper that he gave money to Keangnam Enterprises Vice President Yoon Seong-mo and ordered him to deliver the money to Hong.

Hong denied the allegation but Yoon has said he has an audio recording of Hong’s aides pressuring him. Yoon reportedly surrendered the recording to the prosecution.