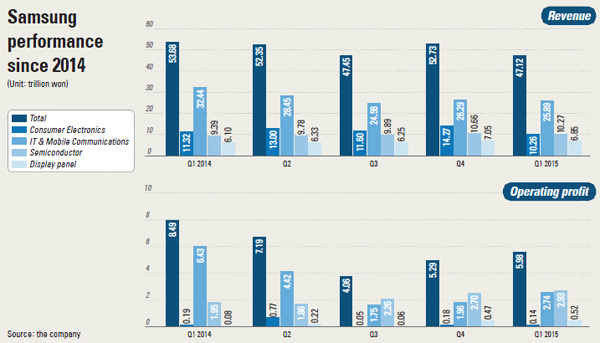 Samsung Electronics on Wednesday reported that its mobile division posted 2.74 billion won ($2.56 million) in operating profit in the first quarter, a 57.4 percent decline year-on-year but 40 percent more than the previous quarter.

Both the company and analysts predicted a better performance by the smartphone division.

“The premium S6 and S6 Edge will help recover revenue in the mobile division in the second quarter as the company is expected to sell more globally than its previous models,” the company said in a statement.

Roh Geun-chang of HMC Security Investment is among many analysts that forecast stronger performance by Samsung Electronics in the second quarter.

“Revenues from the S6 and S6 Edge have yet to be reflected,” he said, “but in the second quarter, both sales and operating profit in the IM division will rebound as the Galaxy S6 series is expected to appeal to consumers at home and abroad.”

One positive sign is that Samsung Electronics displaced Apple as the biggest smartphone maker in the world in the first quarter, according to research from Strategy Analytics.

Samsung held 24.1 percent of vendor market share in the quarter, while Apple had 17.7 percent.

In the fourth quarter of 2014, the two competitors each had a 19.6 percent market share, according to the research by the firm.

The report found that Samsung shipped 83.2 million smartphones, while Apple shipped 61.2 million from January through March.

In other sectors, consumer electronics suffered heavily, posting revenue of 10.2 trillion won and an operating loss of 140 billion won.

This is the first time the consumer electronics division reported an operating loss since the fourth quarter of 2010.

The loss was largely due to the strengthening of the won, which caused demand in Europe and emerging markets to shrink.

Another bright spot for Samsung Electronics was strong semiconductor sales.

Operating profit in the semiconductor business rose to 2.93 trillion won, accounting for almost half of the company’s total operating profit.

The first quarter result was up 50 percent compared with the same period last year thanks to rising demand for DRAM and chips used in smartphones.

Executives also sought to reassure investors that sales will be in better shape in the second quarter.

In total, Samsung Electronics operating profit in the first quarter fell 29.56 percent from a year earlier, while improving 13.7 percent to 5.98 trillion compared to the previous quarter.

With the popularity of its latest flagship S6 and S6 Edge, some analysts project that in the second quarter operating profit is likely to reach 7 trillion won.

Meanwhile, during the IR conference Wednesday the Korean tech company told investors it is already gearing up to launch Samsung Pay in Korea and the United States in the second half of the year.