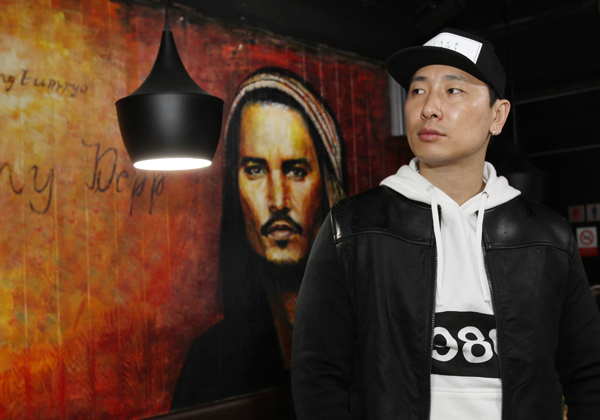 Hard work pays off - or at least it did for Rhymer.

Once homeless, Rhymer has become one of the most powerful players in the K-pop scene.

His talent agency, Brand New Music, is the top agency for Korean hip-hop with up-and-comers like Verbal Jint, San-E and Bumkey.

The 37-year-old CEO also doubles as a music producer. He’s produced “Puss,” sung by Ji-min of girl group AOA in “Unpretty Rapstar,” a TV show in which female rappers showcase their skills.

In a recent interview with Ilgan Sports, a Korea JoongAng Daily affiliate, Rhymer shared his story. The following are edited excerpts from the interview.

Q. I hear you were born with a silver spoon.

A. Yes, my family used to be rich because my father was the executive director of a steel company.

But when I was in the second year of high school, his company got into trouble. Although he worked there for 30 years, he shouldered all the blame. He started his own business, which soon went bankrupt. By my third year of high school, our family was homeless. So after turning 20, I had to support myself.

Is that when you began your career as a musician?

Yes. I made a debut as Joe & Rhymer [in 1995 with producer Joe, who was about to release his album at the time]. It didn’t go well. But I still couldn’t give up on music. In the past, entertainment agencies published their addresses in the back of a music publication called “Junior Magazine.” So after making a demo tape, I visited all the agencies whose addresses I had. But nobody gave me a callback, which made me try even harder. So I released an album again, under the name Kross [with three other members], which again couldn’t get much public attention.

It appears people began to notice you after your participation in Lee Hyo-ri’s song “Hey Girl.”

Right. When Lee released “Hey Girl” in 2003, she was one of the A-listers in Korea. Back then, everybody looked up to her and wanted to please her. But I was pretty cold to her, not on purpose but because I just thought of her as my little sister. Even so, Lee was very thoughtful and even mentioned my name when she was honored at an awards ceremony.

What made you establish an agency that specifically concentrates on hip-hop music?

When I started my agency in 2003, SM Entertainment and YG Entertainment were already very powerful. The only thing I had that they didn’t was knowledge about underground hip-hop. I had this feeling that hip-hop could make me a lot of money.

We established an agency, Brand New Stardom, together in 2009 and formed a boy group Block B. But we separated because Cho wanted to focus on Block B while I had to take care of musicians such as Verbal Jint and Skull, who were relying on me. I didn’t want to make them sidekicks for the boy group. So Cho and I made a rational decision and decided to take care of different musicians.

Was it difficult to start an agency again on your own?

It wasn’t easy, because after the separation I was broke. But fortunately, a company saw potential in Brand New Music and invested 500 million won ($ 463,600) under the condition that we repay in two years. We were able to repay the money after eight months because of Verbal Jint’s successful regular album “You Look Good” [in 2011].

Now that you’ve become a successful hip-hop producer, how do you feel about YG Entertainment’s CEO Yang Hyun-suk?

He is the producer that I respect the most, and I think YG Entertainment makes the best music in Korea. Instead of comparing my agency with [YG], I just want to say that we want to make people around the world feel better by listening to Brand New Music’s songs.

Many people in the music industry say that you love hard work and women.

Yes, that’s right. I don’t like disappointing people who trust me. So when I’m asked to finish work by next week, I give my 200 percent and usually submit it in just two days. I do meet with many different women. I get lonely easily.

Have you thought about releasing your own album as a rapper?

Yes, I’ve actually recorded some songs. Since this year marks the 19th anniversary of my debut, I might do something next year. But at the moment, I want to focus on Brand New Music and grow it further.