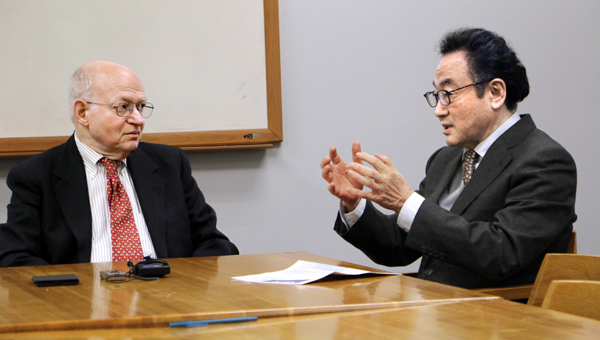 Martin Feldstein, professor of economics at Harvard University and the president emeritus of the National Bureau of Economic Research (NBER), has been exchanging views about the global economy with SaKong Il, chairman of the Institute for Global Economics (IGE) and adviser to the JoongAng Ilbo, since the 1980s. Those conversations go beyond the boundaries of economics textbooks to explore global economic issues in the real world.

The two scholars met at the NBER building in Cambridge, Mass., in February to catch up on the latest economic issues.


SaKong: I’m sure the Korean public, policy makers and business leaders would be very interested in hearing your views regarding the current state of the global economy in the short- and long-term. What are the challenges and policy issues facing the world’s major economies? Let’s start with the United States.

Feldstein: I think we are in good shape, the labor market in particular. The most recent data show significant increases in wages, and the hourly earnings were up 6 percent year-on-year for the recent month. Just one month, but it says something. And the unemployment rate has come down. So I would say that for the coming year, we would likely to see about 3 percent growth. To me, it looks like there’s strong enough growth and tight enough labor markets to see some increases in inflation, both wage inflation and price inflation. I think the Fed will be paying attention to it.

SaKong: How do you see the U.S. economy from a longer term perspective?

Feldstein: In the longer run, I’m an optimist about the U.S. economy. I think we have a kind of entrepreneurial culture that drives innovation and investment in comparison to Europe and Japan. And we have the capital market to support that. We have the natural resources and now we have this new windfall of lower oil prices. So I would say that the U.S. will not see very strong growth because of slow population growth, the slow labor force growth in particular, but we will nevertheless have good growth on a per capita basis.

SaKong: Unlike other distinguished economists like Lawrence Summers, you sound not very much concerned about the possibility of secular stagnation.

Feldstein: No, I don’t see it. For a while Larry was concerned about lack of demand. If we had 2 percent growth year after year, I think, you could say that it looked like some kind of stagnation. But now were not seeing that. So, he and some others are more concerned about whether productivity is growing fast enough. So it’s more the supply side than the demand side. I think our ability to measure what’s happening to real GDP has gotten worse and worse as the economy has gotten more sophisticated. So when we produced tons of steel and bushels of corn, it was easy to figure out what was happening to productivity. But when we are producing electronic equipment and online services, it’s just too hard. So I think we are doing much better than the official statistics suggest.

SaKong: You know there are concerns about the possibility of deflation as well. What is your view on this?

Feldstein: I don’t see any serious risk of deflation. Sometimes we may see some negative inflation numbers. But it’s all very transitory. And I think [Federal Reserve Chair] Janet Yellen has said we are not seeing negative numbers, but very low numbers because of the falling energy prices. But its not real deflation.

SaKong: So again, Summers recently said in newspaper columns that the Fed should wait until there’s a clear sign of inflation. And [on Feb. 10], John Williams of the San Francisco Fed said that it should be done rather earlier than later because if you lose the timing, the rate rise may have to be dramatic and would be more shocking. Which side are you on?

Feldstein: I would be more in Williams’ camp. Williams has traditionally been more dovish than these fast-track Fed people. I had a piece in the Wall Street Journal last spring with Bob Rubin saying these very low rates are causing all kinds of risk-taking in financial markets. We don’t know how dangerous it is. What we know is prices are way out of line. A whole range of assets, whether it’s bonds, emerging market bonds or even Treasury bonds, is not consistent with long-term pricing. And so when that starts to normalize, there could be some serious problems.

SaKong: How about the challenge of rising income inequality?

Feldstein: I think we should be worrying about the very low income people, who are poor by any definition, whose kids stay poor, who go to poor schools, who get in trouble with crime. That’s a serious problem. I think the fact that a small percentage of the population, 1 or 2 percent, makes significantly more income than the average doesn’t bother me. That strikes me as something that happens in our capitalist economy. So the problem really is poverty, and we should be focusing on that. And the notion that middle class incomes have not been rising comes back to the question of measurement. If the products we buy and the services we buy are getting better faster than the government knows how to measure, then those incomes will be rising more rapidly. I don’t think any middle class family says today, “Well, I wish I had the income from the 1960s.”

SaKong: Let’s move on to the eurozone. How do you assess what’s happening there now?

Feldstein: The eurozone is a mess. Its just in terrible shape. You know I’ve been saying even before the euro was created that it was going to create problems for them. But I never thought it would be as bad as this.

SaKong: I remember your article in Foreign Affairs at the time of the euro introduction. You were not that bullish then.

Feldstein: A lot of people were very bullish, especially the Europeans. But I could see that trying to get these different countries all to operate with a single currency, single monetary policy, single exchange rate with no flexibility. There was a lot of talk among the Europeans that, “Well, if we go to the euro, productivity will have to equalize.” But now we’ve had a long time, and there’s been no equalization. So I think it was a mistake. And I think the way they’ve been handling the crisis has been ruinous.

SaKong: Given all this, what’s going to happen to Greece? Do you see any possibility of the so-called Grexit?

Feldstein: I think there is a possibility of that. And it would be painful for them and would be painful for a variety of banks in Europe. But it wouldn’t be the end of the world. But I think unless they do things that they haven’t been able to do in the structural reforms or adopt some of these balanced budget tax incentives, unless they do that, I think they just keep limping along with this very terrible situation.

SaKong: But I always thought from the very beginning of the recent eurozone crisis that there will be no breakup of the euro. If I were in Angela Merkel’s position as a politician, I don’t think I would want to go in the history books as the leader who damaged the euro and the Union itself. For domestic political reasons, Merkel as a politician will have to be tough. But in the end, there has to be some compromise.

Feldstein: On the Greek issue, I think they will try a compromise. Right now they’re being very tough. But in terms of the overall eurozone performance, they need to do more than they’re doing. Institutions are very much opposed to making these kinds of changes. When you were finance minister, you had a government that had the power to make the kinds of changes. I remember when we first met we talked about social welfare program and unions. It was not an issue in Korea. It was all about growth. But that is not where Europe is today.

SaKong: How do you see the effectiveness of the ECB’s quantitative easing?

Feldstein: I think the QE is not going to do very much. I think it was helpful in the United States because we started with the high interest rates, roughly 4 percent for 10-year bonds and the QE brought it down to less than 2 percent. That led to this big surge on the stock market and helped to push up house prices. But there’s nothing like that to happen in Europe. So I think they need something extra if they want to increase demand. It’s not just about improving productivity. It’s also demand. To do that, they’re going to need to use tax incentives. But each government can do something.

SaKong: Would you care to make a brief comment on the Chinese economy?

Feldstein: I’m optimistic about China. I’ve been going to China since 1982. So I have seen this incredible transformation. For the last couple of years, they are trying to move in a different direction with less emphasis on experts and heavy industry, while more on urban quality of life, improving services. So that’s a very big change. In response to the 2008 crisis, they also used the local governments to expand housing construction dramatically. So they overbuilt. Housing in major cities became an anti-inflation hedge, so prices went up a lot and a lot of people were buying multiple homes. So just 3 years ago, they worried the prices were too high for real estate and now they worry the prices are falling too fast. They have to get back to a more normal level. I think that China has the capabilities - savings rate, reserves, government asset, and budget surplus - to do what they need to do. The people who are in charge are very smart, so they’ll do the right thing.

Chairman of the Council of Economic Advisers

Ph.D. in economics at University of Oxford