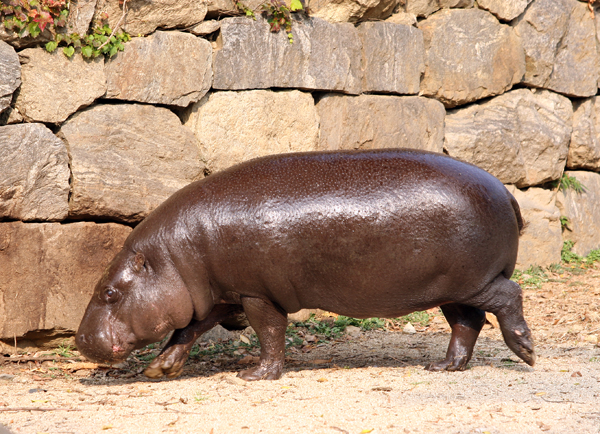 Korea’s sole pygmy hippopotamus, the only one of its kind on the peninsula, is seen at the Seoul Grand Park in Gwacheon, Gyeonggi. [NEWSIS]

The Seoul Grand Park last week expressed its plans to borrow a female pygmy hippopotamus from a British zoo later this year in the hopes that the animal will breed with the country’s lone counterpart and save the species from going extinct entirely on the Korean peninsula.

The female will be transported from the Colchester Zoo and arrive in September at the park complex in Gwacheon, Gyeonggi.

There is currently only one pygmy hippopotamus in Korea, a male that was one of a pair imported from Japan in 1984. The female hippo died in January 2013, while the remaining hippo grew so old that it went blind.

As much as 45 million won ($41,675) is required for shipping expenses, costs that officials from the Seoul Grand Park say a local nongovernmental organization, Nuri Bodeum, is partially collecting through charity.

Of the required funds, around 27 million won will be allotted to airfreight, while 4 million won has been set aside for designing the box that will carry the hippo.

So far, more than 200 people have volunteered to pay about 3.5 million won. A pygmy hippopotamus is a miniature version of its full-size cousin, weighing only a quarter as much.

The International Union for Conservation of Nature and Natural Resources considers it an endangered species, and zoologists predict only 3,000 remain in the world today.