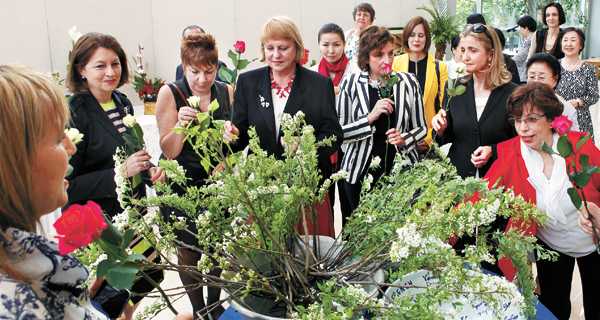 Ambassadors’ spouses gather at the Raemian Gallery in Jung District, central Seoul, on Wednesday for a flower arrangement exhibition organized by the Seoul Garden Club. By Park Sang-moon

Members of the Ambassadors Spouses’ Association in Seoul (ASAS) displayed flower arrangements they crafted in an exhibition held Wednesday at the Raemian Gallery in Jung District, central Seoul, that showcased a celebration of cultural themes.

The daylong annual event was organized by the Seoul Garden Club, of which most ASAS members who featured their artwork are affiliated.

A group of foreign ambassadors’ spouses and local flower arrangement enthusiasts, the Seoul Garden Club has gathered members for monthly social outings around the country since 1957 with the aim to learn more about Korean floral art.

Charity activities led by the group include tree-planting events and handing out free plants to those in need.

More than 10 members from the ASAS presented their artwork to the public, offering a taste of Belgium, Poland, Egypt, Japan, Mongolia, Turkey and Iraq, among other nations.

Accompanying his wife Mariko to the event, Japanese Ambassador Koro Bessho said the couple brought a collaborative work to the exhibition this year. The couple added that they worked hand-in-hand to display a rich, Japanese flavor.

“My wife asked me to help her put an additional touch on her flower arrangement, so I thought my calligraphy would go well,” he said, pointing to a corner of the room in which white roses and green leaves in a porcelain vase were showcased.

Korean calligraphy was seen behind, for which the diplomat provided an English translation: “It’s a Chinese saying that goes, ‘After the rain, the mountain looks freshly new and beautiful. Into the night, the sound of the bell sounds clearer.’

“I think it expresses a feeling that is common among all three countries of Korea, China and Japan. If you forget the nitty-gritty and daily problems in life, you can see nature and life with tranquility.”

Helen Paterson, the wife of the Australian ambassador who heads the Seoul Garden Club, said she enjoyed how the group’s gatherings “brought me closer to Korean ladies, who share their knowledge and history of the country - things that I otherwise wouldn’t have known about.”

As for her arrangement, Paterson combined Asian and Australian elements, placing flowers with yellow and green hues in a Korean vase. Some of the flowers she chose included lilies, carnations and wisteria.

The wife of the Mongolian ambassador, Mun-Adil Magsarjav, chiefly used sunflowers, red roses and candles for her display. She was also the only one to incorporate fruit - “real” green apples.

Tazegul Mamedalieva, the wife of the Turkmen ambassador, said her idea came directly from her 10-year-old daughter, who is currently participating in after-school art lessons.

“My very name translates to ‘new flower,” she exclaimed, adding that she used a sunflower to represent the sun and rapeseed flowers for the sand of a desert. On top of the bouquet were two camels, made out of woven fabric. All of the key aspects represent Turkmenistan, she said.

Dressed in the colors of her national flag, Nehal Selim, the wife of the Egyptian ambassador, emphasized that she wanted to highlight white, red and black.

“I couldn’t find a black flower last year so I bought artificial flowers ... this year, I used black pebbles,” she said.