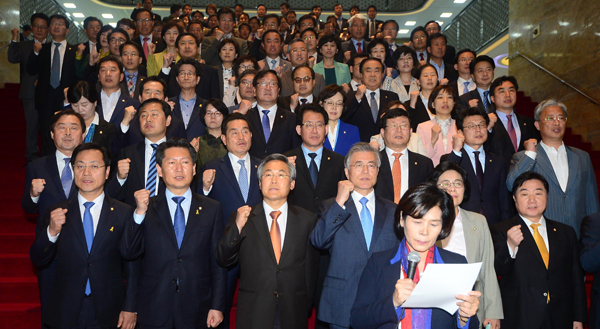 Lawmakers of the main opposition New Politics Alliance for Democracy (NPAD) stage a rally in front of the main conference hall of the National Assembly on Wednesday to denounce the ruling party as the Saenuri alone passed the motion to confirm the nomination of Park Sang-ok as the new Supreme Court justice. The NPAD has strongly condemned the nominee for his alleged involvement in covering up the torture and death of a student activist in 1987. [NEWSIS]

Political tussle over a reform plan for the debt-ridden pension system for civil servants continued in the National Assembly on Wednesday, as the ruling and opposition parties struggled with a contentious deal agreed upon by their senior leaders last week.

Wednesday marked the last day in the April legislative session, and the ruling Saenuri Party and the main opposition New Politics Alliance for Democracy (NPAD) scheduled a voting session at 2 p.m.

As of 7:30 p.m., no voting session took place to revise the bill governing the pension program for civil servants as negotiators from the two parties continued debating a controversial plan to also make changes in the national pension program.

The controversy started last week after the two parties struck a deal to reform the money-losing civil servant pension system.

Wrapping up months of wrangling, the two parties signed a deal on Sunday to overhaul the program, which consumes about 10 billion won ($9.26 million) a day just to stay afloat, by increasing government workers’ monthly contributions while reducing their entitlement payments.

By doing so, the government’s responsibility to keep the program alive will be reduced to 6 billion won a day.

In addition, they decided to form a panel to improve the efficiency of the national pension system and agreed to respect a recommendation by the special committee on civil servant pension reform that the income replacement ratio for the national pension - the percentage of working income an individual requires to maintain the same standard of living in retirement - be raised to 50 percent. It is an increase from the current 40 percent.

But both the public and the Park Geun-hye administration have condemned the plan to change the national pension system. The government has said the change will require about 1,669 trillion won by 2083, while President Park denounced the legislature for pushing ahead with a misleading, populist reform plan for the national pension by exploiting its mandate to overhaul the civil servant pension system.

Earlier on Wednesday morning, deputy floor leaders from the Saenuri and the NPAD sat down to negotiate on a concession for how to deal with the issue. NPAD leaders, including its Chairman Moon Jae-in, insisted that the change must specifically be stipulated by law and that the ruling party must respect the agreement.

“In the agreement, reforming the pension for civil servants and the change in the national pension are like two sides of the same coin,” Moon said during a meeting with party leaders. “You can’t just keep one and abandon the other. The government must not mislead the public with a groundless number and deny the agreement made by the ruling and opposition parties.”

But Kim Moo-sung, the Saenuri chairman, said the NPAD was acting irrationally.

“The deal, signed by the chairmen of the two parties as well as the floor leaders and the head of the special committee on the civil servant pension reform included terms intended to accommodate various situations,” he said.

“But the opposition party is making yet another unreasonable demand and now says it won’t pass the revision bill for the law governing the pension for civil servants, which was agreed upon with difficulty. This is unacceptable political brinkmanship.”

After delaying the voting session, the floor leaders sat down for a last-minute negotiation in the afternoon to discuss a new NPAD proposal.

The main opposition party proposed that the increase in the income replacement ratio for the national pension not be stipulated in the National Assembly’s regulation governing the panel set to discuss improvements to the program. Instead, the change will be stated in a supplementary provision of that regulation.

The NPAD has strongly condemned the nomination for his alleged involvement in covering up the torture and death of a student activist in 1987. The nomination was made in January, and the vacancy in the Supreme Court has remained for months. National Assembly Speaker Chung Ui-hwa used his authority and introduced the confirmation bill as the first item on Wednesday’s vote.