Price based on data use at core of new KT plan

Price based on data use at core of new KT plan 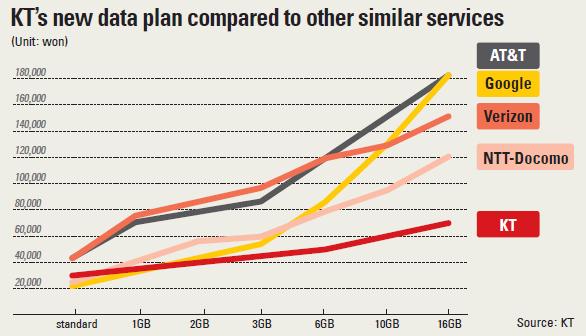 With tech giants like Google now offering cheap wireless service, mobile carrier KT will launch a new service that will charge subscribers based on the amount of data they use, the company announced Thursday.

The new Data Choice Plan will allow customers to choose a set monthly payment based on the amount of data they want, while offering unlimited free calling and texting services.

The new service has made KT the first Korean company to have a data-oriented plan - a move that could potentially reduce costs for the overall mobile plan.

In the United States, such a service was introduced after Google announced that it would directly offer wireless service with its plan, known as Project Fi.

KT’s service will be available starting today. Its rivals SK Telecom and LG U+ also announced that they are working on introducing similar options within this month.

Before KT’s announcement, the country’s three major carriers - SK Telecom, KT and LG U+ - offered different base payments centered on the volume of calls and text messaging.

Another notable feature of the plan includes rollover data plans that enable customers to carry unused data into the next month.

Customers can also use the next month’s data in advance. This is, again, the first time that the country’s carrier has provided such a service.

For 49,900 won a month, up to 6 GB is available. Paying above 49,900 won ensures free calling service both for cell phones and landline phones if the user is subscribed to KT’s fixed line service. 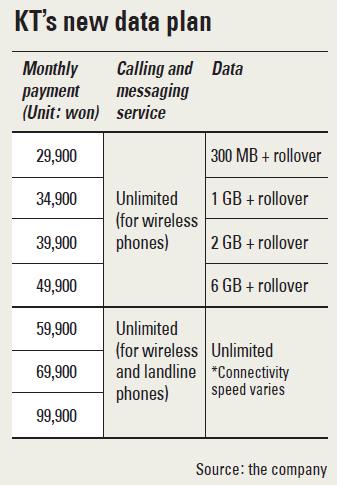 The company said customers can save an average of 3,590 won per month compared to the conventional data plan. When counting the 10 million subscribers using LTE service, the savings will amount to 430.4 billion won annually.

KT said that it intends to offer affordable plans to break into this new realm in mobile phone offerings, even if it could result in losses.

“It required a lot of deliberation to make the first move. But we expect some loss in the initial stage,” said Lee Jeong-ho, a public relations officer at KT, adding that the new data plan is intended to keep pace with the public’s shifting cell phone use.

“As more people use apps to communicate with others, there is less demand for phone calls but high demand for data,” he said.

According to a report by the Ministry of Science, ICT and Future Planning, data usage almost doubled between 2013 and 2014, while the time spent on calls edged up from 165 minutes in March 2013 to 190 minutes in the fourth quarter of 2014.

“As the smartphone has become predominant, users called for a change in the data plan,” said Ryu Je-myung, who heads the Telecommunications Usage Policy Division at the Science Ministry.

“Evolving phone usage habits increased the need to overhaul traditional data plans by moving toward a simpler structure on which to base data amount,” the division head said.

The data-based plan will be especially beneficial for those who have a fluctuating monthly usage rate. Older people - who frequently make phone calls but use less data - can benefit from the new plan.

The company said it also targets those who enjoy watching video clips on their mobile phones.

“If you use smartphone applications or watch video clips more often than before, then I recommend you get a new mobile plan because yu can use unlimited data only with about 50,000 won but other plans require about 70,000 won.”

The company also said that the new option can even be more affordable than Google when a subscriber uses more than 2 GB. Google’s Project Fi, for example, costs 43,100 won for 2 GB while KT charges 39,900 won. 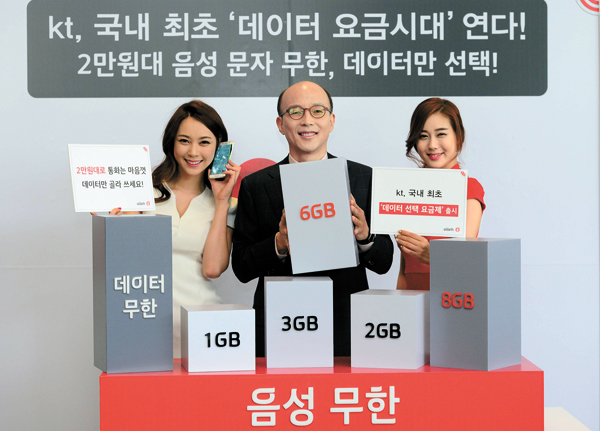 The cost for KT’s new data plan differs based on how much data users select. Subscribers can also roll over unused data, or use the next month’s data in advance.Provided by the company

“The service charge is $10 per gigabyte, but domestic mobile carriers like KT charge 5,000 won per gigabyte, so data usage is half-priced. At the same time, you can use data service without limits on domestic networks, but overseas networks will charge you for use,” Lee said.

The data plan, however, won’t be available for all smartphone users.

“Only Long-Term Evolution (LTE) smartphone users can subscribe to the plan because they are the primary consumer base,” said a representative of KT who declined to be named.

According to a statistics released by the Science Ministry, the amount of data used by LTE mobile users (3.4 GB) is 3.4 times more than that of 3G users (986 GB).

Analysts expect the introduction of the data-based plan to further encourage people to share digital content that they formerly uploaded using PCs due to concerns over data costs.

“When people can have a more affordable data plan like this, they feel less restricted in sharing digital content that typically consumes a large amount of data,” said Lee.

When asked if users should pay cancellation fees to change their plan to Data Choice Plan, Lee admitted it was rather complex.

“If a user currently subscribes to a data plan that’s cheaper than the new one, some of them may be charged. That is because most customers got discounts and subsidies on the condition of subscribing to a certain data plan.”

“But if you keep subscribing for 24 months, and don’t break your contract with us, then you don’t need to pay extra fees.”

KT also said that subscribers will be entitled to up to a 20 percent discount that it offers to all subscribers who complete a 24-month contract.

After KT’s announcement, SK telecom announced in a statement that it will launch a comparable service.

“We are waiting for permission from the Ministry of Science, ICT and Future Planning,” the company said in its release. “The new data plan will start in the 20,000 won range and will differ based on how much data a person uses.”