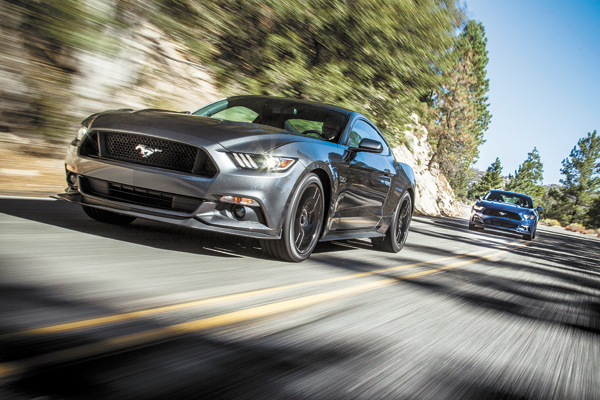 The GT rolls with a V8 5.0L naturally aspirated engine - which gives the car its signature growl - and a six-speed automatic transmission. Its maximum horsepower is 422, and jumps forward with a tap to the gas pedal.[Provided by the company]

Sports cars are often doleful things for consumers, who admire their beauty and speed but know they will never be able to afford driving one off the lot. One of the few exceptions, however, has long been the Ford Mustang GT, which has offered a balance of power and a (relatively) modest price tag. Equipped with a V8 5.0L engine and a sleek exterior, this year’s model is priced at 60 million won ($55,000).

A new car for a new era

The original Mustang was designed to capitalize on the changing times. In the early 1960s, the idea that a family needed only one car was fading away. Youngsters were becoming more individualistic and wanted their own car to reflect that. The era of the “personal car” was arriving. Lee Iacocca, then the vice president of sales for Ford, sensed the trend and spearheaded the development of a car that would sell well, particularly to young men.

After studying the market research of the day, Iacocca decided that this new vehicle needed a sporty design, should be priced below $2,500 and offer customization options for consumers who wanted to personalize their car with features like a more powerful engine. He figured that if he did it right, he could sell 100,000 of these new cars per year. 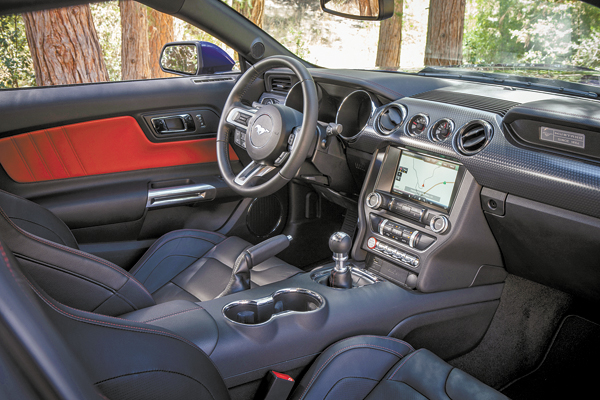 The interior of the Ford Mustang GT is small, a signature of the line.

Iacocca’s prediction for the popularity of the car was right on the money. The Mustang debuted at the New York World Exhibition on April 17, 1964, and demand outweighed supply 15 times over by the end of its first year. Cumulative sales exceeded 680,000 units by the time the 1966 model was released.

The original Mustang was released in different 3 versions: a hardtop sedan, fastback coupe and convertible. Its engine was a six-cylinder, 2.8-liter engine that offered 101 horse power, and customers could upgrade to 4.3 and 4.8-liter engines if they really felt the need for speed.

The original Mustang focused its marketing and design efforts on young men, promising more than just a vehicle. One of the original ads for the 1964 model read: “This guy was just a naive teacher two weeks ago, but now he has three girlfriends and is a core member of a social club. All these things came with the Mustang. It’s not a car, but it is L’elisir d’amor.” While the Mustang no longer needs to promise women or social status, the car is still designed to appeal to male buyers. Now in its sixth generation, the Mustang’s front is more angular and aggressive than any previous model.

The Mustang has kept its traditional taillights, with three vertical lights on either side of the vehicle, and the bulbs illuminate sequentially when the turn signal is activated.

The car’s body is bulkier than other European coupes but it has a relatively small interior, which is another Mustang signature.

I caught a lot of looks when I was test driving the Mustang. The color of the vehicle I drove was an uninspiring grey, but I noticed people stealing glances anyways.

I drove a Mustang GT, which designates the model with a V8 engine. The GT rolls with a V8 5.0L naturally aspirated engine ? which gives the car its signature growl - coupled with a six-speed automatic transmission. Its maximum horsepower is 422, and jumps forward with a tap to the gas pedal. This is a muscle car.

The Mustang GT drives very differently than other European models with similar performance specs. Its suspension is tighter than earlier models but has been kept relatively loose, enabling the driver to feel changes to the center of gravity.

One of the more unique aspects of the GT is its “burn out” function, which is designed to give it a quicker start in drag races. Acceleration is boosted by locking the breaks while spinning the tires, which increases the tire’s grip force and allows for a speedy launch of the vehicle. This usually requires a custom remodeling of a vehicle because burning out can damage a car’s breaks or flood its engine. But the feature comes standard in the GT and is easy to use.

When the function is launched on the computer’s consul, a gauge appears on the screen. As the driver works the brakes, the gauge begins to fill. The screen signals “OK” when enough pressure has accumulated and the front wheels are completely locked. The driver then steps on the gas, sending up clouds of smoke as the locked wheels spin against the ground. When the driver unlocks the breaks, the Mustang GT shoots forward and is ready to race.

The latest Mustang aims to continue the brand’s 50-year history of being a dream car at a price that more average consumers can actually afford. The Mustang GT Coupe is priced at 60,350,000 won and the convertible runs for 65,350,000 won.