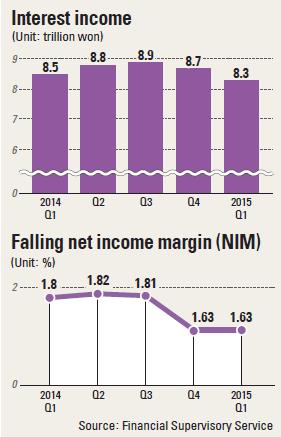 Net interest margins (NIM), a key gauge of profitability, for 18 local banks fell to their lowest levels in the first quarter since 2009, according to a report released Monday by the Financial Supervisory Service (FSS).

The NIM recorded 1.63 percent for the first three months of the year, even lower than 1.72 percent, the previous record in 2009, when the Korean financial industry was hit hard by the global financial crisis.

The NIM hit a record low since its downward path began in 2010, when banks’ loan-deposit margin began to fall, the report said.

Banks’ total first-quarter earnings jumped 61.7 percent from a year earlier due to non-interest incomes, thanks largely to rallying stock prices.

That improvement came as their non-interest income recorded 1.8 trillion won, more than three times the 500 billion won from a year earlier, the FSS said.

The increase mostly resulted from a rise in securities-related income and gains arising from extraordinary factors such as income tax refunds, the report explained.

The return on assets, another significant measure of banks’ profitability, stood at 0.4 percent in the first quarter, up 0.12 percentage points from a year earlier, the watchdog said.

Non-operating income came to 651.9 billion won, up 280 percent from a year earlier, which mostly resulted from a slight increase in income from equity investments in subsidiaries, as well as one-off gains arising from income tax refunds and from companies’ payments of accumulated interest delayed by lawsuits, it said.