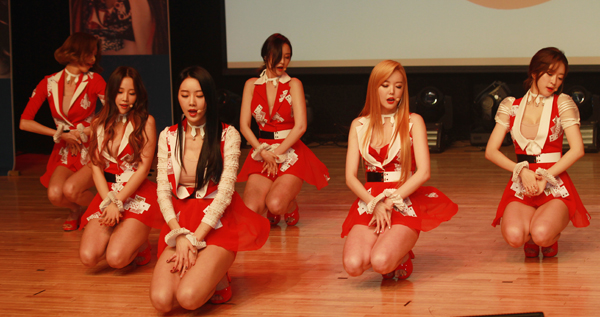 Girl group Dal Shabet performs at a showcase to celebrate the release of their new mini-album, “Joker is Alive,” last month. [JoongAng Ilbo]


The six members of Dal Shabet admit they are not yet considered one of the most popular girl groups in K-pop. They have never taken the No. 1 spot on a TV music show and do not really have a hit song everyone remembers them for. However, they are trying to turn the tide with their eighth mini-album, “Joker is Alive,” which they released last month.

It wasn’t easy for the group to get back on their feet to bring out the record, especially after member Subin was in a car accident last year, and with U-hee undergoing pneumothorax surgery to remove air in her chest.

Promoting the album has also been a challenge. The title track, “Joker,” was censored by broadcaster KBS, which decided the song is not appropriate for the air. It said that the English word “Joker,” when sung in a staccato style in the song, sounds too much like a certain Korean expletive.

“Many things have happened to us, but I think we are now on the rising curve,” said Dal Shabet’s Ga-eun when she sat down with Ilgan Sports with the rest of the members for an interview.

Despite all the struggles, the group stood by their song and said they will continue working hard to be No. 1.

Q. What did you think when your song was censored by KBS?

A. Subin: We didn’t think such a thing would happen. Many said that it was just a noise marketing scheme, but we really didn’t mean to do that.

A-young: We understand that it could sound as if we were saying vulgar words.

Why is this album more important than previous ones?

Gae-un: Many members have participated in producing the album. Subin composed the melody and wrote the lyrics on top of overall producing, and all the other members participated in making a music video, an album cover and some stage outfits.

Do you think your group could be more popular?

A-young: We think so. We haven’t really had an album that really didn’t get any attention, but the important thing here is whether any song in that album actually got the No. 1 spotlight.

I think because we haven’t gotten to any No. 1 place, we had not really earned the “top star” image. But we believe Dal Shabet will have a moment anytime soon.

Do you think you would do well if any of you were part of a reality show?

A-young: I think we would love to do a show in which we show our casual everyday life, how we get up in the morning, work and eat.

Do you ever fight with each other?

U-hee: Jealousy takes a big part. It’s hard for the girls not to get jealous of one another, even though we work as a team. However, how you show that jealousy is important. We sometimes try to conceal or try to learn the things that we are jealous about in others.

Ji-yul: We try to promote the members’ prominent sides by giving them compliments and the [member] in the center of the attention will also do her part to take care of the other members [who get less attention].

What do you want to say to your fans the most?

Subin: What made Dal Shabet have five years of experience in the industry is not the agency, not us, but our fans. We want them never to regret that they have supported us. We’ll be the best.

Se-ri: We will always and continuously put in our best effort as we are not just sitting here and waiting for fans to cheer.