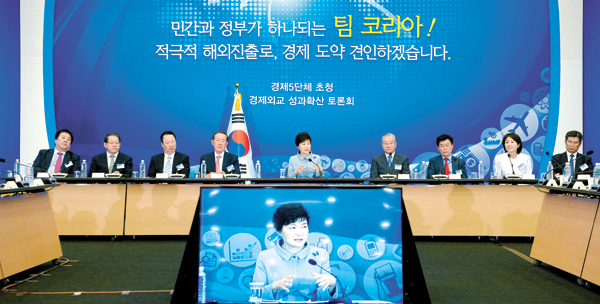 President Park Geun-hye talks about the significance of expanding trade support policies to urge more small and midsize companies to start exporting at a roundtable discussion at the KCCI headquarters in central Seoul on Tuesday. [NEWSIS]

The leaders of Korea’s five largest business lobbies requested the government provide more infrastructure and support to help complete business deals made during President Park Geun-hye’s overseas trips in the first half of the year.

More than 230 businesspeople, including the heads of major conglomerates like Hyundai Group, CJ CheilJedang and Hyundai Heavy Industries, attended a roundtable discussion with President Park Geun-hye and government officials at Korea Chamber of Commerce and Industry (KCCI) headquarters in central Seoul on Tuesday, where the requests were made.

“If Korea hadn’t eyed the export market, we wouldn’t have been able to achieve the economic growth we now enjoy,” Park said, emphasizing that the export of manufactured goods has elevated Korea to the world’s eighth-largest nation by trade.

However, Park pointed out that Korean exports have been heavily dependent on conglomerate-led deals and a small number of hit products.

“During recent trips, I realized that our small and midsize companies can thrive if export infrastructure is well-equipped,” she said, asking trade-related ministries and organizations to expand policies to support SMEs.

According to the Ministry of Trade, Industry and Energy, 34 percent of Korea’s exports - worth $570 billion last year in total - come from small and midsize companies. Only 2.7 percent of the nation’s 3.2 million small companies profited from exports during the same period.

The lobby groups said local companies have a hard time finding business networks in emerging markets. Of 31,000 expos held across the world last year, Korean companies participated in only 270, but brought back an average $590,000 in export contracts per company, they said.

The proposals asked the Korea Trade Insurance Corporation to ease regulations on granting trade insurance. Currently, companies are allowed to get trade insurance only up to one-third of the previous year’s export performance, which makes it difficult for small start-ups and SMEs exporting for the first time to benefit.

The proposal added that the Trade Ministry should push lawmakers to pass the recently signed FTAs with China and Vietnam, in order to dominate their domestic markets before competitors and benefit from tariff reductions as much as possible.